Catholic activists stage a peaceful rally in front of Christ the Light of the World Parish Church in Waena, Jayapura Diocese, on July 18, calling for the Catholic Church to appoint a native Papuan bishop. (Photo supplied)

The Catholic Church has been present in Papua for 127 years since the arrival of Father Cornelis Le Cocq d’Armanville, a Dutch Jesuit missionary priest, in 1894, but no native Papuan priest has ever been a bishop.

This has prompted a group of lay Catholics to launch a campaign to get the Vatican to appoint Papuan priests to lead the five dioceses in Indonesia’s easternmost region.

According to Soleman Itlay, a lay Catholic activist, “127 years and counting is a very long time to wait.”

He and other activists have staged a series of rallies outside several churches in the provincial capital Jayapura in recent weeks to promote their cause.

"Through these actions, we are asking the Vatican how long do indigenous Papuans have to wait before they can be trusted to lead the Catholic Church in their own land," he told UCA News.

"Even if they are not ethnic Papuan priests, one who was born and grew up in Papua and knows the life experiences of Papuans would be something."

There is probably a tendency to worry that if a bishop is a native Papuan, he will talk about independence or speak out too loudly about human rights violations

Two dioceses in the region are waiting for a new bishop. Timika Diocese has been vacant since 2019 following the departure of Bishop John Philip Saklil, who was appointed archbishop of Merauke but died just a week later. Jayapura Diocese is also waiting for a new prelate after Franciscan Bishop Leo Laba Ladjar retired two years ago.

The push to appoint indigenous Papuan prelates comes amid increasing criticism from Papuan Catholics of senior church figures, including those in the bishops' conference, for not supporting them.

Ongoing protests are also targeting Archbishop Petrus Canisius Mandagi of Merauke, who in January signed a memorandum of understanding (MoU) with PT. Tunas Sawa Erma, a palm oil company and subsidiary of the Korindo Group, to support a joint Indonesian and South Korean plantation venture. 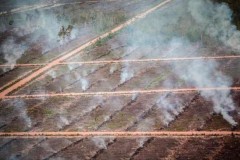 The MoU, which saw the archdiocese receive 800 million rupiah (US$56,600) with 1.6 billion rupiah to follow in the next two years, has been condemned by activists who say the archbishop is ignoring the damage the project will have on the environment and indigenous people.

Melvin Waine, coordinator of these protests, said Archbishop Mandagi was “giving legitimacy to the company to continue annexing living spaces and threatening the future of Papuans.”

Itlay said such actions added to the disappointment locals feel with the current crop of bishops and would spur the call to appoint Papuan bishops in their place.

Petrus Supardi, another Catholic activist, said some people think their push for Papuan prelates is a bit racist.

"That's because they don't do an in-depth analysis of the work of the Papuan Catholic Church, which tends to collaborate with the state to oppress Papuans," he said.

He suspected the Vatican was playing a political game with the appointment of bishops.

"There is probably a tendency to worry that if a bishop is a native Papuan, he will talk about independence or speak out too loudly about human rights violations," he said.

Itlay said, in principle, they do not want the Church to get involved in political issues such as the pro-independence movement in Papua as it is risky.

"We hope that the Catholic Church will focus on its mission,” he said.

He said the Catholic Church in Papua was allowed to use the slogan "100 percent Catholic, 100 percent Indonesian," first coined by Indonesian bishop and national hero Albertus Soegijapranata during the fight against Dutch colonialism in the 1940s, which to Indonesian Catholics today emphasizes the spirit of nationalism.

“However, what should not be forgotten is also being 100 percent Papuan. This means that the Catholic Church must be truly rooted in the history and reality of Papuans," he said.

"If Papuans are poor, persecuted, marginalized and oppressed, the Church must also be a part of that situation in its entirety and unmitigated.

"The Church cannot keep its distance and remain silent in the face of suffering. When the dignity, identity and status of the Papuan people are downtrodden, the Church must also experience and feel this and try to raise them again."

The aspirations by lay activists for a native bishop are not only expressed through protests in front of churches. They are also conveyed through open letters uploaded on social media and aimed at bishops, the Indonesian Bishops' Conference and the nuncio in Jakarta.

Such aspirations have reached the ears of church leaders including the archbishop of Mandagi.

Archbishop Mandagi said he chooses not to respond. "I don't want there to be a war of words on social media about the appointment of bishops," he told UCA News

Itlay said they will continue advocating for native bishops despite having been reprimanded by church officials several times, including threats to report them to the police.

"We will not stop speaking out. We are also part of the Catholic Church and we hope that its leaders really want to be in solidarity with the reality of the Papuans,” he said.