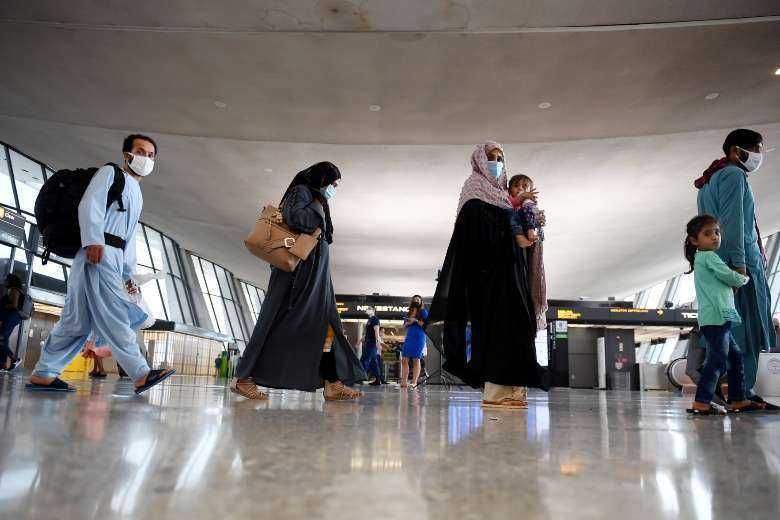 Afghan refugees arrive at Dulles International Airport on Aug. 27 in Virginia, United States, after being evacuated from Kabul following the Taliban takeover of Afghanistan. (Photo: AFP)

An Italian missionary priest who was forced to flee Afghanistan following the withdrawal of US forces and the Taliban takeover of the country continues to pray for people left behind in the abandoned Catholic mission.

"I send you my Christmas greetings with the same image and the same evangelical quote which I used seven years ago, in 2014, when I was about to leave for Kabul. This year, having forcibly returned to Italy, I can repeat with the Magi: 'We have seen his star in the East!'. Merry Christmas! Pray for Afghanistan!" said Father Giovanni Scalese, 66, reports Fides news agency.

Father Scalese says the Barnabites have not forgotten the Afghan mission as he sent Christmas greetings to the people in the Taliban-ruled country with special prayers.

The priest, a member of the Clerics Regular of St. Paul (the Barnabites) and the head of Catholic mission in Afghanistan, returned to Rome on Aug. 25.

The priest was accompanied by five Missionaries of Charity nuns and 14 orphaned and disabled children and young adults in their care.

The sisters' center closed just like the sole Catholic parish in Afghanistan, the Chapel of Our Lady of Divine Providence, located at the Italian embassy, where the pontifical mission was housed.

We thank the Lord for the success of the operation. And I also thank all of you who in these days prayed for us. Continue to pray for Afghanistan and its people

The Catholic mission, known as Missio sui iuris, existed for a century after being launched in 1921 with permission from Afghan king Amanullah. It came shortly after Italy became one of the first countries to recognize Afghanistan after independence from Britain.

Pope Pius XI entrusted the mission to the Barnabites. This continued uninterrupted until this year thanks to an agreement between the Afghan and Italian governments and the Holy See. In 2002, Pope John Paul II elevated the Barnabite mission to a pontifical mission, Missio sui iuris.

Pope Francis appointed Father Scalese as the head of the mission in 2014.

The priest said that even during those tumultuous days leading to his evacuation from Kabul to Rome, he kept praying for Afghanistan.

"Mission accomplished. I arrived this afternoon at Fiumicino airport with five nuns and 14 disabled children they looked after in Kabul. We thank the Lord for the success of the operation. And I also thank all of you who in these days prayed for us. Continue to pray for Afghanistan and its people," he said after landing in Rome.

The Afghans, who were staff and family members of the Pro Bambini Association of Kabul, which ran a daycare center for disabled children, were welcomed by various religious congregations thanks to efforts by the Barnabites.

Efforts are underway to resettle Afghan refugees, mostly members of families of the Italian detachment in Kabul, who arrived in Rome separately.

In Afghanistan, the pontifical mission was limited to charitable and humanitarian activities, and Father Scalese’s spiritual and pastoral responsibilities were limited to foreigners. Due to sensitivities, the mission avoided any form of evangelization among the local population in the predominantly Muslim nation.

Before the Taliban takeover, there were an estimated 10,000 to 12,000 Christians in Afghanistan, mostly comprised of converts from Islam. Christians mostly lived secluded lives hidden from the public eye to avoid persecution by extremist forces, according to US-based International Christian Concern (ICC).

Denouncing Islam is considered a disgrace by both conservative Afghan society and radical groups like the Taliban. Converts can face dire consequences including death if their conversion is discovered.

ICC reported that many Christians went into hiding due to alleged threatening phone calls and door-to-door searches for Christians. Christian leaders have appealed to the community to maintain a low profile to avoid targeting by the Taliban.