Bishops and churchgoers have expressed their support and prayers for Cardinal Luis Antonio Tagle after the Vatican confirmed that he tested positive for coronavirus on his arrival in the Philippines on Sept. 10.

Cardinal Tagle, the former Manila archbishop and now prefect of the Congregation for the Evangelization of Peoples in Rome, is believed to be in the Philippines for a vacation and to spend time with his elderly parents.

"Cardinal Tagle actually tested positive for Covid-19 with a pharyngeal swab carried out yesterday on his arrival in Manila,” Matteo Bruni, director of the Holy See press office, said on Sept. 11.

Acting CBCP president Bishop Pablo Virgilio David said he would ask all Filipino bishops to include 63-year-old Cardinal Tagle in their daily Masses.

“I will include the cardinal in all the daily Mass intentions of all the parishes and mission stations of the Diocese of Kalookan until he recovers from Covid-19. As acting CBCP president, I will also ask the bishops all over the country to include him in all their daily Mass intentions,” Bishop David told UCA News.

“We [the Church] need him to stay healthy for his important ministry for the universal Church.”

Archbishop Socrates Villegas of Lingayen-Dagupan, a former president of the bishops’ conference, told UCA News that he has encouraged churchgoers to recite ten Hail Marys every noon for the cardinal’s speedy recovery.

“I wish him a fast recovery because he is the most prominent prelate of our country and a leading prince of the Church,” Bishop Bastes told UCA News.

The cardinal’s former parishioners at Manila Cathedral also promised their prayers and support. Faith, not efficiency, is heart of mission, says Tagle 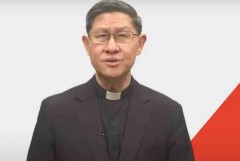 “I will light a candle for him every day until he recovers. Although he is asymptomatic, he is still not 100 percent safe from the virus. He needs our prayers and support. We are here for you, Cardinal Chito,” parishioner Lalaine Diaz told UCA News.

Another churchgoer said she would pray for the cardinal in her novena to the Our Lady of the Pillar, the patroness of Imus, Cardinal Tagle’s hometown in Cavite province.

Vatican Press said on its website that Cardinal Tagle is the first head of a Vatican dicastery to catch the virus.

The Vatican also announced that Cardinal Tagle had a swab test in Rome before he left for the Philippines but the result was negative.

“The cardinal underwent a swab test in Rome on September 7. His result was negative. But he does not have any symptoms and will remain in mandatory self-quarantine in the Philippines,” said Bruni in a press conference.

Cardinal Tagle served as the 32nd archbishop of Manila from 2011 until December 2019.

He left Manila on Feb. 9 to assume his post at the Vatican with the Congregation for the Evangelization of Peoples, also known as Propaganda Fide.

The Manila prelate's new assignment is an important position in the Vatican as it takes care of the mission in territories mostly in Asia and Africa.

The congregation was established nearly 400 years ago in 1622 by Pope Gregory XV with the task of ensuring the "transmission and dissemination of the faith throughout the whole world."

As head of the office, Cardinal Tagle oversees the work of most dioceses in Asia, Africa and Oceania, in which one third of the Catholic Church’s 4,000 dioceses are found.

Cardinal Tagle is also president of Caritas International, a confederation of 165 Catholic relief, development and social service organizations operating in over 200 countries and territories.

In May, he was appointed by Pope Francis as a cardinal-bishop, making him the only Asian cardinal to hold such a rank.