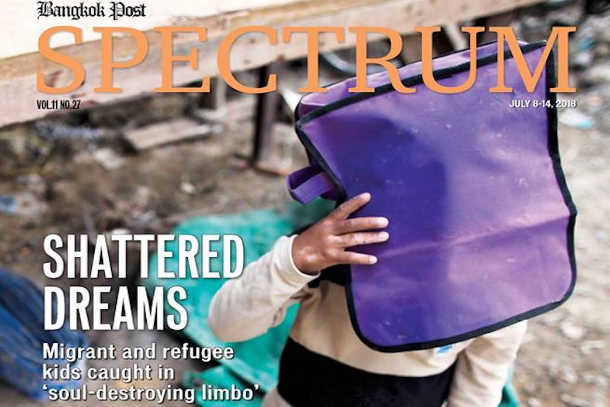 Spectrum, the Bangkok Post's popular Sunday magazine, has been closed suddenly amid budget cuts at the newspaper. (Photo from Facebook)

Thailand's premier English-language daily newspaper has stopped publishing a popular Sunday supplement known for its outspoken investigative journalism in a country where severe restraints on media coverage are commonplace.

The Bangkok Post issued a brief notice to explain it decided to stop publishing Spectrum "due to a change in news and content policy." It did not elucidate.

The newspaper went on to add, however, that it would remain committed to "highlighting the stories of victims who feel as if the justice system has failed to give them a fair deal."

With Spectrum gone, however, in-depth coverage of injustices and human rights abuses is likely to become more sporadic at the paper, according to several people familiar with affairs there.

Insiders say Spectrum has fallen victim to a series of cost-cutting measures undertaken by management over the past two years.

For a decade before its demise, Spectrum won numerous accolades for its consistent coverage of contentious social and political issues by a small team of award-winning Thai and foreign journalists.

Hill had to work on a newly imposed shoestring budget with a permanent shortage of staff. Morale and quality both suffered in the newsroom as a result, he said. He had taken over after the supplement's long-time editor, Australian Paul Ruffini, and some other staff resigned amid budget cuts in late 2016.

Ruffini was widely credited in local media circles with helping turn Spectrum into an exemplar of quality journalism in Thailand. "The English-language newspapers in Thailand were operating at a pretty rudimentary level in terms of news gathering, story ideas, story construction and presentation," Ruffini recalled.

Rather than continue to rely on repurposing press releases and rewriting articles published elsewhere, as often happens in Thai newsrooms, Spectrum's reporters were encouraged to engage in longer investigative pieces, pursue original ideas and get their own sources, the former editor said.

"Once they got it, this opened up a new world for the reporters, photographers and designers in terms of what they believed they could do and achieve," Ruffini said. "Freed from the hierarchical groupthink of most newsrooms in Thailand, they became more independent and critical. That's a good thing."

The result was a Sunday supplement that, based on numerous testimonials, became more popular with many readers than the actual daily newspaper that published it.

"Spectrum was something different and a good read on Sunday mornings," said Hill. "It's very sad that Bangkok Post management failed to recognize its quality and were prepared to close it to save money. It also sends a message to readers that the paper is dying a slow death."

Spectrum's demise has left Thailand's media landscape without one of its most reliable sources of information on current events and controversial issues.

"Spectrum was a beacon of investigative journalism in a country where such reporting is very rare," said a veteran British journalist who asked to remain anonymous because of the sensitivity of the issue. "With its endemic corruption, human rights abuses and lack of the rule of law, Thailand needs journalists and publications that are prepared to ask awkward questions of the powerful."

The supplement's demise is indicative of general trends across Southeast Asia. From Cambodia to Myanmar, once relatively vibrant media markets have been falling on hard times both for financial reasons and because of renewed restraints placed on press freedom by authoritarian governments.

"After a promising start, the nascent media in Myanmar and Cambodia are in a shambles, apart from a few independent operators," Ruffini said. "The only thing I hope will change is that media consumers will be hankering for real news again. There are plenty of talented journalists out there hoping for that opportunity [to do quality journalism]."