Power to bind or to loosen: synodal reflection 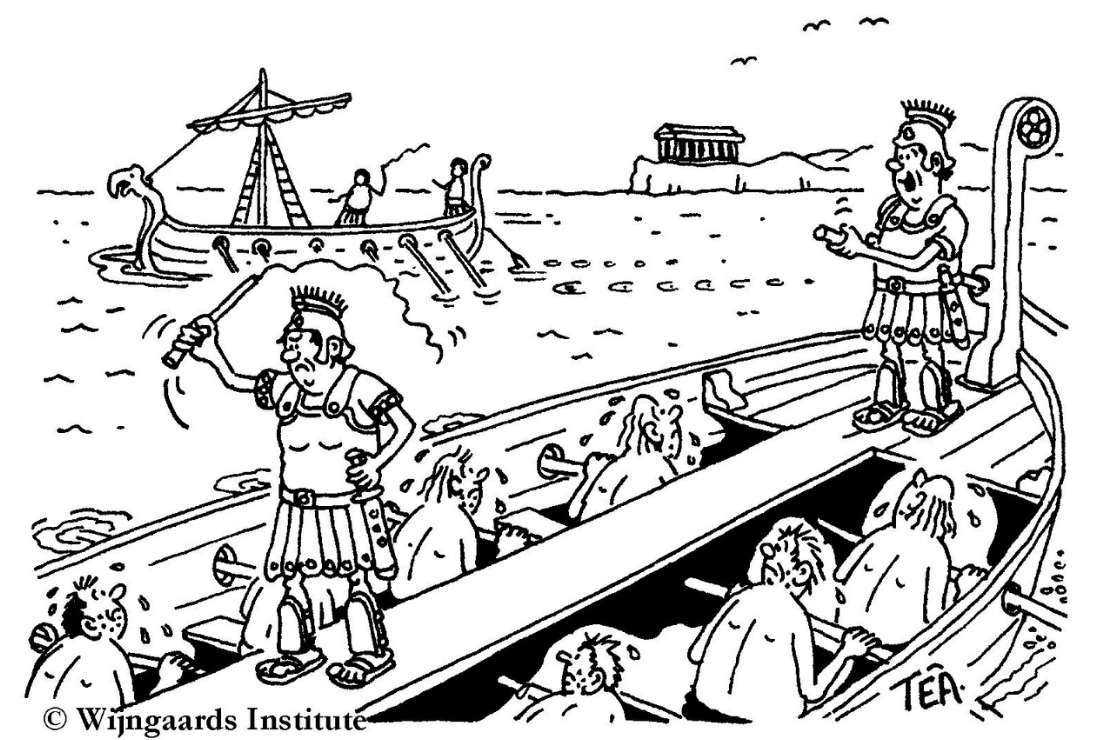 “Stop moaning! Be proud of your role in our splendid Roman navy!” (Illustration: Tom Adcock)

“Does [a master] thank his slave because he did what he was told? So you also, when you have done everything commanded of you, should say, ‘We are unworthy slaves; we have only done our duty’.” (Luke 17:9-10)

In the 1980’s I used to lecture on Sacred Scripture at the Missionary Institute London. When discussing the dreadful misunderstanding of texts on slavery I always experienced an emotional response from my students. Many hailed from Africa where memories of the colonial slave trade have left painful wounds.

One time, during our lunch break, one of my students came to talk to me. He was a Filipino. Taking his seat next to me at the table, he told me the following story.

“I come from the island of Iloilo, but I studied philosophy in a major seminary in Manila. Every year we were sent for a year’s pastoral formation to a local parish. There I saw a terrible thing.”

“Well, the parish priest wanted to extend the cemetery. But when they started digging in a field just outside the cemetery wall, they found heaps of ancient human skeletons just dumped like rubbish into holes in the ground.”

“Horrible”, I said. “But strange. The Spanish usually treated their dead well.”

“Yes. But these were not Spaniards. An archaeologist identified them as African, male and female. Bruises on their bones showed they had been slaves … I later found out that the Spanish colonists in the 16th and 17th centuries were not allowed to keep local people as slaves, since all inhabitants of the Philippines had been declared Spanish citizens. So they started importing slaves from Africa. Around 1650 AD every Spanish household in Manila had one or two African slaves. And this was done by practicing Catholics …”

Jesus’ words “whatever you bind on earth will be bound in heaven” are truly momentous. Binding or loosening applies to obligations people have. Binding refers to forbidding something, loosening to permitting it. The Jewish tradition preserved in the Mishnah defines to bind as ‘to forbid by an indisputable authority’ and to loosen as ‘to permit by an indisputable authority’.

Jesus appointed the apostles to guide people in their quest for God’s new realm of love, and he obviously wanted their successors to follow the same path. Part of that guidance was to consist in telling them, authoritatively, what was allowed and what was not.

A power fraught with danger

Authoritative guidance can be a great help to people who sincerely want to do God’s will in difficult circumstances. It can relieve them of a sense of guilt in complex moral situations. It lifted an enormous burden from Christian converts in 50 AD when the first General Council, the Council of Jerusalem, decided that the Old Testament law, the Tora, did not bind them.  But it is obvious that Jesus did not want his apostles and their successors to use the binding and loosening power light-heartedly. He calls the scribes and Pharisees of his time ‘blind guides’ for all the erroneous obligations they imposed on people (Matthew 23,16-26).

And, sadly, the history of the Church shows that popes and bishops have often made crucial mistakes when exercising their power to bind or loosen. One of them is the case of slavery.

Slavery was common in the Roman, Hellenistic and Jewish world of Jesus’ time. Jesus taught through parables. On one occasion, when teaching the need for humility in the presence of God, he holds out this comparison: “Does [a master] thank his slave because he did what he was told?  So you also, when you have done everything commanded of you, should say, ‘We are unworthy slaves; we have only done our duty’.”  (Luke 17,9-10)

Did Jesus hereby teach that slavery of a human being by someone else is allowed? Of course, not. As little as he was permitting cheating when presenting the parable of the unjust steward (Luke 16,1-13). The point of the parable is that we should use our intelligence. Jesus warned that on the last day, ‘the Son of Man will come as a thief in the night’ (Matthew 24,43). Did he thereby condone stealing or burglary? No, the point of the comparison is that his coming will be totally unexpected.

Did Jesus condemn slavery?, you may ask. No, he did not, at least not explicitly. Jesus sided with the underdogs, the poor, the deprived. He healed slaves as well as lepers and other outcasts. But he did not explicitly take up the causes of social reform, such as racism, the emancipation of women, the abolition of absolute totalitarian rule and-so-on. Such human rights were implicitly contained in what Jesus did. He established that one and the same rite of baptism would apply to all disciples. He invited all to the same eucharistic meal. He did not lay down limits as to who could minister in his community.

Unfortunately, Church leaders have often made mistakes when exercising their power to bind or loosen. Slavery is a tragic example. Basing themselves on Jesus’ text on a slave’s humility quoted above and some equally misunderstood passages in St. Paul’s Letters, popes defended the legitimacy of slavery in one century after the other. In 1866 Pope Pius IX still taught: “Slavery is not at all contrary to the natural and divine law … It is not contrary to the natural and divine law for a slave to be sold, bought, exchanged or given.”

Published by arrangement with the Wijngaards Institute for Catholic Research