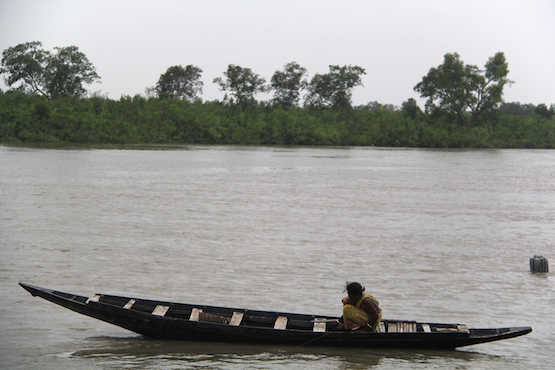 For the second time in three years, hundreds of activists in Bangladesh have made the long march from the capital Dhaka to Sundarbans, the world's largest mangrove forest in southern Khulna district, to protest government plans to build two coal plants near the World Heritage Site-listed forest.

The March 10-13 protest aims to garner public support, in order to persuade the government to drop plans to construct the power plants, which would jeopardize environment and biodiversity of the forest and livelihood of local community of rice farmers and fishermen.

If not halted, the government would start constructing this year the proposed 1,320-megawatt Rampal coal plant and 565-megawatt Orion coal plant 14-kilometers within the Sundarbans, listed as a UNESCO World Heritage Site and a protected wetland under the Ramsar convention. The forest is spread between Bangladesh and India, but the largest portion lies in Bangladesh.

The Rampal plant is a joint venture of the national power companies of Bangladesh and India. The Indian company had to abandon two projects in India in recent years due to strict environmental guidelines and mass protests.

The Sundarbans already has been facing threats due to air and water pollution due to overpopulation and encroachment. Activists fear smoke, ash and noise from the plants would slowly destroy the forest, making millions of coastal villagers more vulnerable to natural disasters.

"The Sundarbans is not just a World Heritage Site but a source of livelihood for 1 million people, a natural shield for 40 million coastal people, which these plants would jeopardize. Moreover, they threatens the unique biodiversity, animals, birds and fishes, which would slowly go extinct," says Anu Muhammad, an economist and secretary for the march organizer, the National Committee to Protect Oil, Gas, Mineral, Power and Ports.

Tens of thousands of local villagers who depend on the Sundarbans for livelihood — from fishing, shrimp farming to honey production — might also pay dearly once the plants are in the place, he says.

"These power plants are destructive, treacherous projects and we will resist them by raising public awareness to save the Sundarbans from human greed," he says.

The committee organized a similar protest march Sept. 24-28, 2013, but failed to dissuade the government. Leaning toward coal for power shows hunger for power in Bangladesh, a nation of about 160 million, where about a third of people lack power. Presently, the country can produce maximum of 8,000-megawatts of power, mostly from natural gas.

Despite Bangladesh's vocal stance on climate change globally, the country is turning more to cheap power solutions like coal. By 2030, the government aims to generate 15,000-megawatts from coal power, raising it to 50 percent from the current 1 percent, through a dozen of coal plants like those proposed near the Sundarbans.

Approximately, the plant will require one shipment of coal everyday through narrow rivers of the forest, triggering fears of a possible spill. It will take about 219,600 cubic meters of water from the Passur river, which is likely to change salinity and temperature of water which sustains the mangroves.

These altogether might be an insidious threat to Bangladesh's dwindling population of Royal Bengal tigers found in the Sundarbans. A recent survey found only around 100 tigers in the Bangladesh side of the forest, down from 440 in 2004. Wildlife of more 1,000 species including rare species of river dolphins and the masked finfoot bird , might also be endangered.

Analysts see potential political and diplomatic interest for government in rushing the project.

"There is no doubt we need power, but there are other alternatives and places to generate power. No sane person can accept a power project at the expense of the natural heritage site Sundarbans, except those who want to fatten their pockets," says Mujahidul Islam Selim, president of Communist Party of Bangladesh that supports the march.

"Moreover, the government wants to keep warm relations with India for future credit lines. For the Indian company it's an opportunity to overcome losses from abandoned projects by making money from the proposed plants," he says.

Despite the warnings and dangers the government is adamant to continue with project, citing that the power plants would create employment in the area, reduce poverty and contribute to overall development.

However, a top government minister recently admitted to possible adverse impacts of the coal plants, but added that the project can't be called off.

"There will be some impacts obviously," Finance Minister A.M.A. Muhith told reporters in Dhaka on Feb. 15, adding that boats carrying coal on a daily basis would "substantially affect" flora and fauna.

"Yet, this project can't be relocated," he said. Bangladesh's Sundarbans is the largest single block of mangrove forests in the world. (File photo)

The Catholic charity Caritas runs various projects in southern Bangladesh for protecting the Sundarbans and livelihood schemes for the local community. However, it has refrained from taking a stand on the issue.

Like Caritas most development groups and charities have refrained from taking a public stance on the issue other than some outspoken groups and political parties, fearing backlash from the government, possible hassles in approving and funding future projects.

"We understand that power plants near the Sundarbans would have negative impacts on the environment and local community, but we are not in a position to take a stand because this is a government project," Tapas Sarker, disaster management officer at Caritas Khulna, which covers the forest, told ucanews.com on March 10.

"Personally, I don't support the project, but organizationally we have no comments. If people think this project is not right they would resist it in democratic ways," Sarkar said.