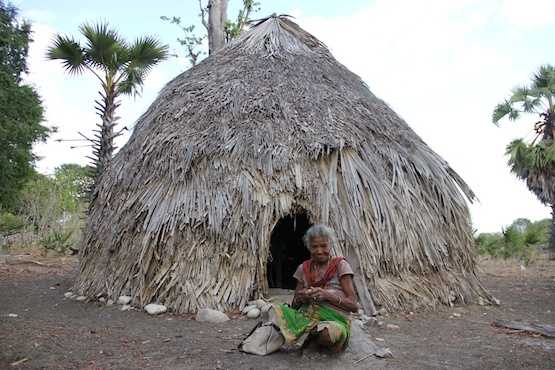 A villager sits outside a typical home in Besipae, in South Central Timor district, East Nusa Tenggara province. The province is one of the most underdeveloped in Indonesia. (ucanews.com photo)

They witnessed the first public flight of an N219, a locally made 19 seater, similar to Canada's Twin Otter, which was developed by aeronautical engineers at the state-owned manufacturer PT. Dirgantara Indonesia.

The manufacturer has secured 200 orders, including from Thailand's coastguard.

Crowds in Bandung, West Java, where the plane is manufactured, and television viewers throughout the nation, cheered.

Such an 'aha' moment was a welcome distraction from harsh realities in many parts of the country such as poverty and unemployment as well as inadequate health and education services.

As of February this year, about 7 million people were unemployed. This is about 5.3 percent of the country's 131-million labor force.

Figures from the Central Statistics Agency for March put the number of people living in poverty at 27.7 million, more than 10 percent of Indonesia's total population of 250 million. Of this number, some 17.3 million live in rural areas, including the Christian-majority provinces of West Papua and East Nusa Tenggara as well as Maluku and Gorontalo. The remaining 10.4 million live in cities.

Indonesian President Joko Widodo admitted in a 'state of the nation' address on Aug. 16 that poverty levels remain high. Poverty in Indonesia — as in many other countries — is a complex reality. Inequitable distribution of wealth, rampant corruption, and mismanagement of natural resources are among the primary causes.

Indonesia has huge potential to further develop natural resources. But for decades, it has lost billions of dollars due to the mismanagement of the energy and fishery sectors, which are controlled by a wealthy elite.

For example, Indonesia lost $18 billion in the oil trading sector during 2012-2014, when Susilo Bambang Yudhoyono was still president, due to mismanagement by Petral, which is a subsidiary of the state oil company Pertamina. Such a huge sum could have been used to significantly raise living standards.

Peter Carey, a British scholar who specializes in Indonesia's modern history, estimates that between 2001 and 2015 Indonesia lost about 205 trillion rupiah, approximately US$15.7 billion, as a result of corruption. Only about 11 percent of that amount was returned to the state through court action.

Credit Suisse's 2016 Global Wealth Report shows that Indonesia's 'wealth gap' ranks fourth in the world after Russia, India and Thailand. The report notes that only one percent of the country's population are in control of 49.3 percent of the wealth. Some analysts estimate that about 85 percent of Indonesia's wealth is controlled by only 35 people.

Even though per capita GDP is about US$3,600, the unequal distribution acts as a barrier to cutting the number of people who are poor.

Building from the peripheries

Since most of the poor live in rural areas, there needs to be a comprehensive approach to developing villages and improving the livelihoods of farmers, including those in remote areas.

Since President Widodo was sworn in as president in 2014, he has initiated various projects to improve communications and transport links to outlying areas of Indonesia. This includes opening new roads to ensure a fairer distribution of wealth. The president also vowed to improve other infrastructure such as ports, airports, dams and irrigation systems.

There have already been some positive achievements. In 2016, for the first time, Papuans bought fuel at the same price — about 50 US cents per liter — as people in more densely populated parts of the archipelago. Previously Papuans paid up to US$9 per liter.

The government has started building 35 dams — with a target of 65 dams — to support people and farmers in areas where water is scarce. Four of the dams are located in the Catholic majority province of East Nusa Tenggara, which includes West Timor, and will benefit thousands of deprived refugees from Timor-Leste, formerly known as East Timor. The Ministry of Rural Development for Disadvantaged Areas and Transmigration has allocated US$4.6 billion for village development projects, such as road and bridges.

However, noble goals are jeopardized by systemic corruption. Hardly any sector escapes its impact. In the past, corruption was mostly a concern at high levels of government and in parliament. But now it reaches down to the village level, where some local leaders embezzle state funds.

It is important to both reduce the 'mentality' of corruption as well as to improve detection and punishment.

The government should give top priority to controlling and monitoring the use of funds in order to escape the poverty trap.