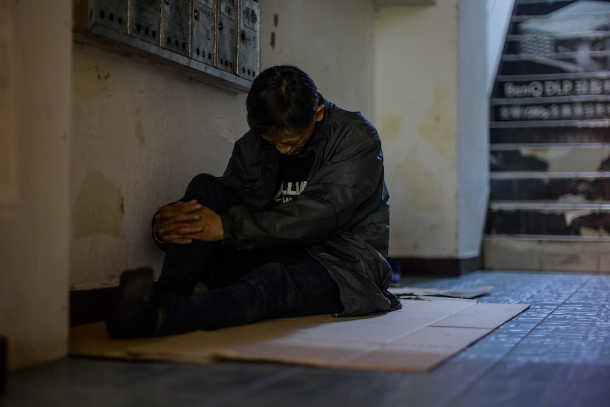 A man sleeps while sitting on a cardboard mat in the entrance of a residential building near a 24-hour McDonald’s in Hong Kong on March 24. (Photo: AFP)

Beijing’s move to enact legislation giving it a degree of security control over Hong Kong has cast serious doubts over its future as a major financial and business hub.

The Covid-19 crisis has already left the city’s economy reeling amid a synchronized global downturn expected to be the worst since the 1930s.

Hong Kong's economy shrank 8.9 percent in the first quarter of 2020 compared to 2019, the third straight quarter of contraction and the city’s worst quarterly fall since 1974 when records began.

"The threat of Covid-19 seriously disrupted a wide range of local economic activities and supply chains in the region," a government spokesman said on May 4. "With the disease evolving into a pandemic in March, the economic fallout became even more severe."

Now, with businesses suddenly reconsidering their future in the city on the back of Beijing’s extraordinary intervention, observers are expecting property prices to tumble as jobless numbers rise — an economic fallout that will hit the millions of poorer people in the territory hardest.

According to the Hong Kong Poverty Situation Report, released by the government in December 2019, 1.4 million of the city’s seven million people were living below the poverty line in 2018

This was a 10-year high, with the government warning that the weakening economy in 2019 would likely have further repercussions on grassroots earnings.

That is 20.4 percent of the city’s population, the second highest level since 2009 when records were first collated and the year of the global financial crisis.

With economists now forecasting a global recession — and possibly even a depression — this number and percentage were already set to climb higher before the Chinese government’s decision to intervene in Hong Kong affairs.

Poverty is especially bad among Hong Kong’s elderly, with 20,000 more in the 65-plus age bracket than in 2017 and a total of 360,000; Hong Kong’s population is continuing to age as part of a major ongoing problem

The report said that many people in this demographic lived without any income. The post-intervention poverty rate among those aged 18-29 also saw a year-on-year increase of 0.5 percentage points to 9.3 percent, meaning around 90,000 young people are living in poverty.

The Hong Kong government has moved to try and address growing poverty in recent years but is playing catch-up and failing to stem the trend. But charities and rights groups have pointed to a failure to raise minimum wages as well as the lack of any universal pension scheme as major factors in the deteriorating situation.

As a global finance hub and trading economy, Hong Kong is beholden to the broader global economy. The World Economic Forum has forecast that that Covid-19 is likely to cause the first increase in global poverty since 1998 when the Asian financial crisis hit.

As China has tightened its grip on Hong Kong since Xi Jinping took the reins of the Communist Party, there has been an exodus of both wealthy expatriates and Hong Kongers who have dual citizenship to places like the US, UK, Australia and Canada.

Some multinationals have shifted their regional headquarters from Hong Kong to Singapore, Tokyo and even to the mainland, where the environment is at least stable

Xi’s latest moves will only accelerate such moves and the loss of jobs that these companies brought to Hong Kong. The flood of mainland tourists who have provided plenty of ballast to Hong Kong’s economy in recent decades was already slowing before democracy protests broke out last June. Now there is little likelihood of them returning in anything like the numbers that were previously seen. This will see more jobs in hospitality, retail and related sectors dry up even further.

Indeed, it’s hard to see any economic good news any time soon. It’s a truism that in a deteriorating economy it’s the poor who are hit first. The recent poverty statistics from Hong Kong show that is ringing true for the city and the situation is, unfortunately, only going to get worse.