'I do not discuss religion or politics. Instead we discuss human rights, peace and friendship' 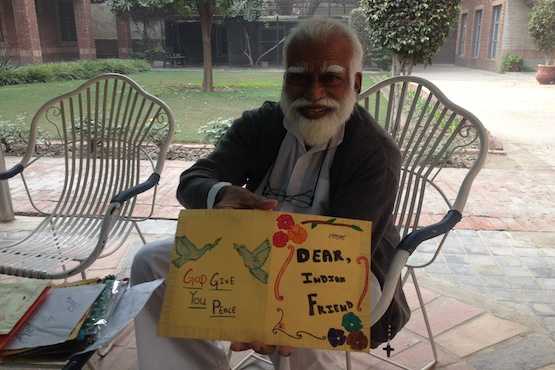 Father Joseph Kalathil posing with a letter from a student in Lahore, Nov. 8. (Photo by Kamran Chaudhry)

For the past five years, Father Joseph Kalathil has been delivering letters to students in India and Pakistan, despite deep political animosity between the regional archrivals.

And this year, the Jesuit priest based in Chandigarh, northern India, arrived at the Pakistani border on foot.

He informed fellow Jesuits in Pakistan about his presence at Wagah border crossing, located 24 kilometers from Lahore, in Pakistan's Punjab Province.

"After getting through the passport control, it was only a five minutes' walk and I was in another country," Father Kalathil told ucanews.

The director of his self-styled "Peace Mission" delivered handwritten letters from 32 students at three Indian schools to two Catholic schools in Faisalabad diocese in Pakistan during his Oct. 22 to Nov. 9 visit.

He returned with parcels and replies to the letters he delivered.

Since 2012, he has delivered hundreds of similar colorful letters between students at educational institutes in the neighboring countries.

"I wanted to start with children," he said.

"I do not discuss religion or politics.

"Instead we discuss human rights, peace and friendship."

In such circumstances he responded that even enemies talk.

The 78 year-old-priest also visited a few parishes of Lahore archdiocese and ruins related to St. Thomas in Taxila, Rawalpindi-Islamabad Diocese.

According to tradition, on his way to India St. Thomas passed through Taxila and preached at the court of King Gondophares.

This year, Father Kalathil could not deliver mail to schools of eastern Lahore archdiocese.

Relations between India and Pakistan are at an all-time low, so he was concerned that schools would have faced problems after he left.

"I could not jeopardize the mission," he said.

"Seventy years of hostility and fighting have done irreparable harm and destruction to both the nations.

"Rulers on both sides are encouraging enmity to cement their seats.

"When they cannot deliver or face the nation, they divert public attention."

The nuclear armed South Asian nations maintain a disputed border and regularly fire across the official 'Line of Control' without warning.

The hostility began soon after Pakistan declared independence from India as part of a British backed agreement in 1947.

The restive region of Jammu and Kashmir region has been in dispute as both countries lay claim to it.

The unresolved dispute has led to myriad skirmishes and at least three major wars between India and Pakistan.

A visit of Archbishop Sebastian Shah of Lahore and 13 diocesan priests to three Indian dioceses for an Ecclesial Brotherhood Conference was a highlight of the Lahore chapter last year.

"The best gift the Church can offer is peace between the two neighboring countries," he said.

"At the time of partition, thousands saved themselves by wearing a cross on their neck because Hindu and Muslim fanatics would not attack Christians.

"Today the same cross can make both countries united and stronger."

ucanews.com tried to contact several bishops and priests to comment on the one man-mission of Father Kalathil, but most of them declined citing it as a "sensitive" matter.

In 2012, Caritas Pakistan launched a "Peace Building Initiative among the Citizens of Pakistan and India" with support of Caritas in Italy.

The project aimed at giving opportunities to young leaders in both countries to engage in dialogue and cultural exchanges.

However, the project was renamed "Peace and Social Harmony" the following year without direct reference to India.