Feast at the shrine of St. Anthony of Padua draws thousands including Hindus and Muslims 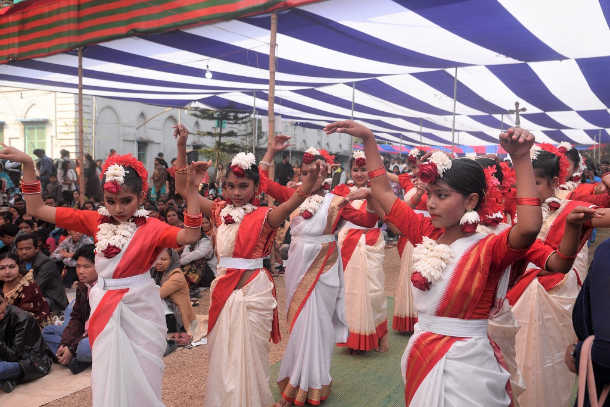 Catholic girls perform a traditional religious dance at the beginning of Mass during the annual pilgrimage at St. Anthony of Padua shrine in Panjora village in Gazipur district on Feb. 7. (Photo: Piyas Biswas/UCA News)

For the past three years, Badhon Gomes has started preparing several weeks in advance for the annual pilgrimage at St. Anthony of Padua shrine in Panjora village in Bangladesh's Gazipur district.

Gomes, 30, is a Catholic from Parowan, one of 16 villages including Panjora that make up St. Nicholas of Tolentino Church (1695) of Nagari, one of the oldest Catholic churches in the country.

For the fourth consecutive year, Gomes coordinated distribution of free lunches to hundreds of devotees of the Portuguese saint during the annual feast day, celebrated on Feb. 7.

“We offered free meals to 500 devotees, but our target was more than 1,000. Due to restrictions on vehicle movements around the shrine, many devotees missed out,” the father of one told UCA News.

Christian and Hindu villagers from Parowan and neighboring Bhasania, under St. Augustine of Hippo Catholic Church, have been supporting the initiative. Between 800 and 1,200 people have received free food from Gomes’ group in the past three years.

“It is a matter of pride that we have St. Anthony shrine in our area. People believe they can receive special blessings from the great saint by serving his devotees,” Gomes added.

Panjora village houses a chapel with a small but extremely popular centuries-old statue of St. Anthony that is believed to have miraculous power to fulfil any wish of devotees.

The shrine, under Dhaka Archdiocese, is the most popular among about the dozen Catholic shrines in Muslim-majority Bangladesh. Other shrines are mostly dedicated to Mother Mary, barely attracting 5,000 to 7,000 devotees during annual pilgrimages.

This year two Masses at St. Anthony shrine drew more than 70,000 devotees including Hindus and Muslims. About 6,000 devotees attended every day during the nine-day novena preceding the feast day, church officials said.

As a feast day liturgy ended, thousands lined up before the chapel and replica statues of the saint to pray and to pay their respects. Devotees touched, kissed and garlanded the statue in an emotional display of popular devotion.

Hundreds of devotees also offered various types of manots (gifts) as a gesture of thanksgiving and to place their wishes before the saint.

“I heard a lot about St. Anthony from my friends, so I came here for the first time with my wife and four-year-old son. We prayed for the well-being of our family. I wish to come here every year,” Sri Trinath, 26, a Hindu from Dhaka, told UCA News.

As devotion to St. Anthony continues to swell, in 2018 Dhaka Archdiocese appointed a senior priest as a full-time rector to oversee the shrine and cater to the spiritual needs of devotees. “We served 200 pilgrims in 2019 as we started on a small scale. This year we served more than 500, and next year’s target is over 1,000. Local villagers and former club members at home and abroad donate generously to support our initiative,” Pranto Rozario, 24, vice-president of the club, told UCA News.

Rozario noted that their target pilgrims are mostly those coming from faraway places, especially indigenous Catholics from Mymensingh Diocese.

“Usually, on the feast day, pilgrims meet up with relatives and have lunch. But many don’t have relatives and feel shy approaching anyone for lunch, while food prices in hotels are extremely high on the day. We want to ease their suffering by doing this small service,” Rozario added.

Mighty Sampson, 36, a Catholic from Chittagong Archdiocese, has been visiting the shrine for the past 14 years. He and several others have been arranging two buses with donations from local Catholics to bring in 80-100 pilgrims to the shrine

“To be honest, I am not very religious, but I am a very spiritual person. Due to my busy work schedule, I cannot go to church and attend religious functions regularly. But I have been doing it as a social service to the community,” Sampson, a coordinator of engineers at GPH Steel company, told UCA News.

In addition to bringing in Catholics for the pilgrimage, the Chittagong group also sponsor expenses for pilgrims who cannot afford it.

Sampson says he seeks no favor from St. Anthony or God in return. “I believe that by helping people I can connect to God more closely. By helping people to attend a religious feast, I may receive God’s blessings directly or indirectly. I don’t expect anything, but God will provide in the way that is best for me,” he added.

Many local Catholics offer pilgrims snacks, water and resting places at their houses.

The local Church also receives huge donations in the form of money and logistical support from both Christians and non-Christians, both individual and organizational, said Father Joyanto S. Gomes of the parish of Nagari Catholic Church.

The flowers used in the liturgy on the feast day came from a Catholic family, while the decoration of canopies, a sound system and LED screens were sponsored by individuals and organizations, Father Gomes said. In addition, several Catholics donated 650 lunch parcels for pilgrims.

With donations from devotees, the site has been expanded to accommodate more people during the pilgrimage in recent years.

“In the future, the Church wants the shrine to be elevated to a basilica. We hope devotees of St. Anthony will continue to support us,” Father Gomes added. A call to holiness and humility

It is not known exactly when devotion to St. Anthony started and gained momentum, but it is widely believed to be a centuries-old tradition.

Locals say a small statue of St. Anthony appeared and reappeared at Panjora several times. People found this mysterious and miraculous, so many started to flock there to pray.

Soon, many people started claiming that their prayers to the saint, including having babies, finding lost objects and overcoming challenging situations, had been fulfilled miraculously. Word spread and the legend of St. Anthony grew and the shrine became a religious hotspot.

A local Catholic woman, Catherine Peries, later donated land to set up a chapel dedicated to the saint, where the miraculous statue has been kept ever since.

In 2016, the Vatican sponsored a tour of an 800-year-old relic of St. Anthony including his uncorrupted tongue in Bangladesh. It was also displayed at St. Anthony shrine in Panjora in recognition of the saint’s huge popularity in the country.

On the feast day this year, Holy Cross Cardinal Patrick D’Rozario of Dhaka officiated two Masses and called devotees to be holy and humble like St. Anthony.

“St. Anthony was a wise and holy man but he was also very humble and simple. His great accomplishments draw us close to him. As his devotees, we have been baptized in the same faith and called to preach the Good News like him in thoughts, words and deeds,” Cardinal D’Rozario said in his sermon.

St. Anthony was born in Lisbon, Portugal, on Aug. 15, 1195. He was ordained a priest and later became a Franciscan friar. He was widely acclaimed for his outstanding love of the poor and the sick as well as his expert knowledge of scripture.

He died in 1231 at the age of 35 in Padua, Italy, from a chronic case of edema. The Vatican canonized him a year later and in 1946 he was declared a doctor of the Church.