Longest time spent so far with a head of state, with whom he has much in common 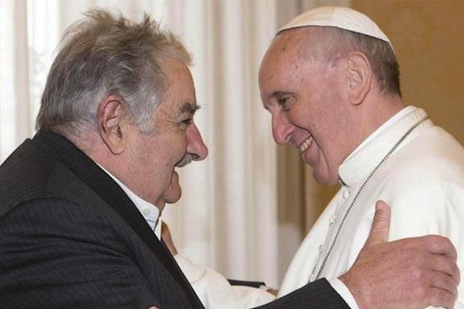 [Note: Uruguayan president Jose Mujica donates 90 percent of his wages to charities, lives with his wife in a modest farmhouse instead of the presidential palace and drives himself in a decades-old Volkswagen Beetle)

“The Pope is very pleased for having met with a wise man”, was the official report from the Holy See following the 45 minute private audience of Francis with Uruguayan president Jose Mujica, the longest so far with a head of state. Although Mujica is a declared atheist and did not attend the inauguration of the first Latinamerican pope last March, he did request an interview with Francis, which took place on Saturday.

Wearing a blue shirt with no tie, a green sweater and a dark jacket, Mujica, 78, was received very warmly by the Pope and before they walked into for their private meeting, they took a few minutes to remember Uruguayan theologian and writer Alberto Methol Ferré, ‘a common friend’ recently deceased and who for decades was an advisor to the Vatican.

“He (Methol) opened our minds” said Mujica, with the Pope adding “he helped us to think”

The meeting as programmed started at 11:00 hours sharp and 38 minutes later Francis, private secretary Alfred Xuareb walked in but the two leaders continued talking in a display of great chemistry and coincidence on the many issues they addressed.

The Uruguayan president presented the Pope with three statuettes, ‘gaucho’ style and a book from Alberto Methol and Alver Metalli: “Latinamerica in the XXI century” while Francis gave Mujica a copy of the Aparecida, (Brazil) Latam Bishops Assembly conclusions.

“Check the index and you’ll see the issues that interest you” Francis told Mujica and before leaving, they warmly embraced and again the Pope thanked the visitor, “thank you for coming”.

This was the first meeting of the Uruguayan president with the Pope. Originally it was planned that Francis before going to Brazil for the Youth Convention next July would stop in Uruguay and Argentina, but it was not possible and thus the special meeting this weekend at the Vatican.

“I think that if they let him, he’s going to make a revolution inside the Church, towards simplicity”, said Mujica on the meeting with Francis, adding “he’s just like talking to a good neighbour you’ve known for years”.

Mujica described the meeting as very positive, admitting the significance and influence of the Catholic Church in Latinamerica, and underlined “it was essential to have fluid relations with the church”.

The Uruguayan president said he humbly asked the Pope, in humanitarian terms, to have the Church involved in the peace process of Colombia; “the process must continue and be successful, because it is crucial for the Colombian people and the whole of the Americas”

Regarding Uruguay, Mujica talked with Francis about the priority of sustaining the combat against hard core poverty since it is not a question of money, “the State can send people to help but can’t ensure love and care, so this requires the commitment of many groups, and that is what I’m asking from the Church, a militant presence”.

Mujica also recalled the role played by catholic priests with the nascent Uruguayan nation two centuries ago, and currently the Church’s contribution to public debate on relevant issues besides world peace and its involvement in education and caring associations.

After the meeting Mujica and the Uruguayan delegation visited the Vatican Secretary of State Tarciso Bertone and the head of Relations with the States, Dominique Mamberti.

Montevideo Archbishop Nicolas Cotugno said that it was evident the existence of “a clear tuning, a certain common denominator regarding care and love for the poor which is present in the Pope and in Mujica: From different paths, but it’s there”.

Monsignor Cotugno said that “Francis is introducing great changes from the simple and plain to the daily life of the pope; He is a man close to the people and Mujica is close to the people. I think the meeting can be explained by that shared sensitivity and also because of the fact the Pope is Latinamerican, Argentine and all which that means”.

Full Story: Francis and Mujica full of praise for each other share 45 minutes in the Vatican