Pope's visit to Congo 'will let world know about its conflicts'

Pope Francis will visit Kinshasa, the African country's capital, and war-ravaged Goma in the east 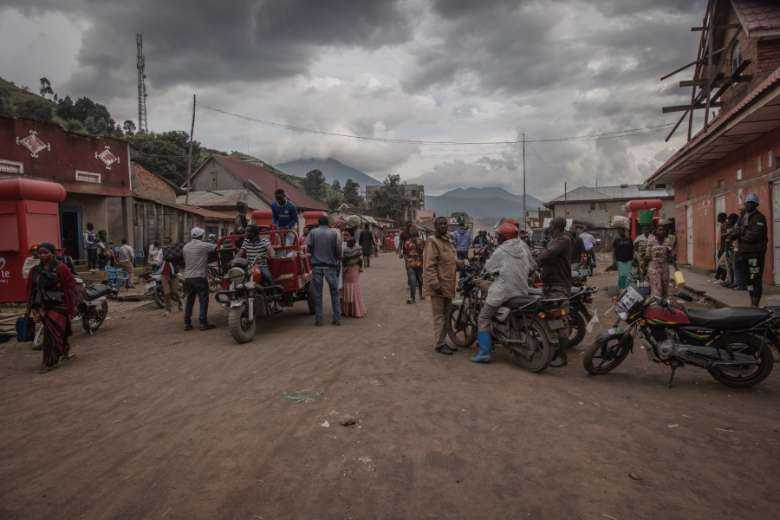 People attempt to cross the Democratic Republic of the Congo and Ugandan border with their belongings to seek refuge after clashes between the Congolese army and the M23 on April 2. (Photo: AFP)

A Catholic priest in the Democratic Republic of the Congo said Pope Francis will be visiting the country not only to reconcile it but also to tell the world "about the conflicts that are tearing this country apart."

The announcement of the pope's July 2-5 visit "sounded like the voice of the angel of the Lord to the poor shepherds in the region of Bethlehem: 'I bring you good news of great joy, which will be for all the people,'" said Father Georges Kalenga, a member of the planning committee who is also second deputy secretary-general of the Congolese bishops' conference.

Father Kalenga told Catholic News Service that the pope will be visiting to reconcile a people blighted by the evils of "tribalism, regionalism and clientelism, the exclusion of political opponents, practices and discourses that weaken social ties, compromise national cohesion on several levels, particularly on the socio-political level."

Pope Francis will visit Kinshasa, the country's capital, but he also will travel to Goma, in the east. Father Kalenga said Goma is "the place chosen symbolically for the pope's meeting with the people who live in the eastern part of the country, bloodied for more than two decades by wars, rapes, massacres and all the other violations of human dignity."

It's a war that has claimed at least 6 million lives, as the warring factions fight to plunder the country's resources.

Father Kalenga said the region is also "a symbol of all the natural disasters that many people in Congo have suffered, including the eruption of the Nyiragongo volcano, earthquakes, floods and epidemics."

He said the mixed church-government commission has chosen the sites where Pope Francis will celebrate Masses, but the church needs to mobilize funds to prepare the sites the pope will visit

The eruption of the Nyiragongo volcano in May left more than 30 people dead and more than 6,000 families homeless as the people of Goma were in the process of "building and rising from the ashes of the volcanic eruption of Jan. 16, 2002."

Eastern Congo is under the influence of external forces "that participate in the perpetuation of violence," said Father Kalenga. He cited neighboring countries offering "back-up bases to the armed groups that sow desolation on a recurring basis in certain areas ... from the province of Ituri to that of Tanganyika, passing through the provinces of North and South Kivu."

"These same countries facilitate the illegal exploitation of the natural resources of Congo by multinationals that have set up their headquarters" in neighboring countries, Father Kalenga told CNS.

He said the mixed church-government commission has chosen the sites where Pope Francis will celebrate Masses, but the church needs to mobilize funds to prepare the sites the pope will visit.

Ordinary Christians say it's going to be a unique event in their lives.

"I wasn't there when Pope John Paul II visited the DRC. Hopefully, I will have the chance to see his successor," said Joyce Nkwawawa of Goma. St. John Paul visited Congo, then Zaire, in 1980 and 1985.

"It's going to be a lifetime experience," she added. "It will be something special."

From Congo, Pope Francis will travel to South Sudan from July 5-7.