The basilica of Our Lady of Sheshan in Shanghai, China. (Photo: Wikimedia Commons)

Pope Francis has assured Chinese Catholics of the support of the universal Church.

“Dearest Catholic brothers and sisters in China, I wish to assure you that the universal Church, of which you are an integral part, shares your hopes and supports you in your trials. She accompanies you with prayer for a new outpouring of the Holy Spirit, so that the light and beauty of the Gospel might shine in you as the power of God for the salvation of those who believe,” he said after the prayer of the Regina Coeli on May 24.

Catholics in China celebrated the feast of Our Lady, Help of Christians and Patroness of China on May 24. The Virgin Mary is venerated under this title at the National Shrine of Our Lady of Sheshan in Shanghai.

Pope Francis prayed that the Chinese faithful “might be strong in faith and steadfast in fraternal union, joyful witnesses, promoters of charity and hope, and good citizens,” Vatican News reported.

In 2007, Pope Benedict XVI proclaimed a Day of Prayer for the Church in China, which is celebrated each year on May 24. Each year, on the Day of Prayer, Pope Francis has expressed his closeness to all Chinese Catholics.

A key moment in diplomatic relations between the Holy See and China took place in September 2018 with the signing of a provisional agreement on the appointment of bishops.

At the time Pope Francis called it "the fruit of the extensive and complex institutional dialogue between the Holy See and authorities of the Chinese government, which was inaugurated by St. John Paul II and continued by Pope Benedict XVI.”

“It is not a matter of appointing officials for the management of religious matters, but of having authentic pastors according to the heart of Jesus, committed to work generously in the service of the people of God,” he said.

The Chinese government allowed Bishops Joseph Guo Jincai and John Baptist Yang Xiaoting to take part in the Synod on Young People at the Vatican in 2018.

Since the coronavirus pandemic started, the Holy See and China have exchanged personal protective equipment aimed at fighting the virus.

Many Chinese Catholics have also participated through social media in the celebration of the pope’s daily Masses. 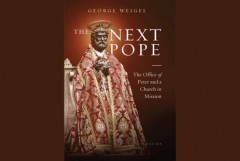