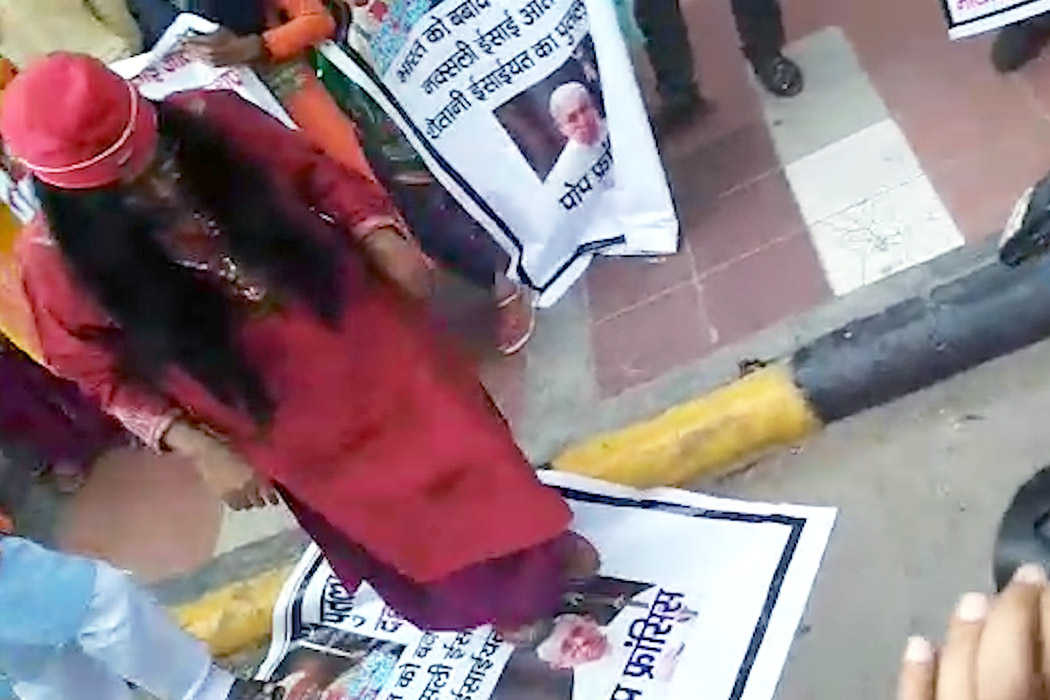 A still image of a man believed to be controversial Hindu leader Om Swami Maharaj stomping on a picture of Pope Francis. (YouTube screengrab)

A hard-line Hindu group has called on Christians to be thrown out of India and stamped on images of Pope Francis while accusing him of promoting terrorism in a video being circulated on social media since May 25.

The video shows controversial Hindu leader Om Swami Maharaj with a group of about 20 people carrying placards and banners with pictures of Pope Francis not far from Sacred Heart Cathedral in New Delhi.

Maharaj made a speech before members of the group began stamping on the pope's image. During his speech, he accused Indian Christians of promoting terrorism and Maoism in the country and demanded they should leave India.

If Christians don't leave India, Maharaj said, they will use force to expel  them.

Maharaj spread a banner featuring a picture of the pope on the road and then, with several others, stamped on it. Slogans of "Pope Francis murdabad" (Down with Pope Francis) were shouted.

The video has caught the attention of Christian groups in central India, prompting them to approach the police to stop the video's circulation.

Richard James, spokesman for the Rashtriya Isai Mahasangh, the ecumenical national Christian forum based in Madhya Pradesh, said the police have been alerted to the video.

"This kind of public display of hate toward any religious group or leader would not be allowed in a civilized society," James told ucanews.com.

Jaideep Prasad, inspector general of Police in state capital Bhopal, told ucanews.com that his officers "will not allow anyone to spread discord among people with such videos."

Madhya Pradesh is among states governed by the pro-Hindu Bharatiya Janata Party (BJP).

"I have already instructed officials to do what is necessary to ensure peace," said Prasad on May 29.

Bishop Theodore Mascarenhas, secretary-general of the Indian Bishops' Conference, believes the timing of the video is connected to a pastoral letter issued by Archbishop Anil Couto of Delhi which BJP leaders have condemned as anti-national.

The letter sought for Catholics to pray ahead of the 2019 general elections because India was facing "a turbulent political future that threatens the country's democracy." BJP leaders said the letter was part of a Vatican game to tarnish India and the BJP government led by Prime Minister Narendra Modi.

"The video is an aberration and not expected," said Bishop Mascarenhas, who asserted that it in no way does it represent the opinion of the majority of India's Hindus.

Christian and Muslim leaders say the BJP, which officially adopted Hindutva or Hindu cultural nationalism as its ideology 25 years ago, supports hard-line Hindu groups who seek to make India a Hindu-only nation.

Although the BJP says its idea of nation is based on Indian culture and not on religion, its leaders favor policies that support Hindu religious practices and concepts which challenge India's cultural and religious diversity.

In one example, Subramanian Swami, a BJP parliamentarian, moved a bill last year seeking capital punishment for cow slaughter since the animal is revered by a section of Hindus. He has continued to argue that cow slaughter should be tried as murder.

In a May 23 Twitter message, he urged Modi to cease all diplomatic relations with the Vatican. He also said the Vatican embassy in New Delhi should be sealed as the Delhi archbishop is "a formal nominee of the Vatican."

Christian leaders like Bishop Cajetan Francis Osta of Muzaffarpur in Bihar said such controversies are "political gimmicks to divert the attention of the people from burning issues" such as inflation and unemployment.