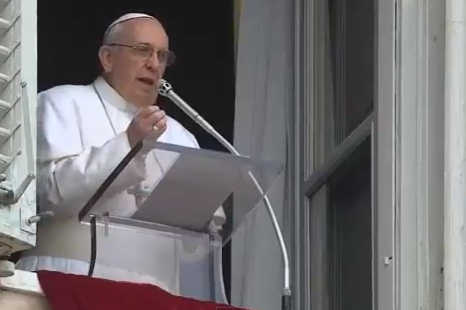 The new Pope’s spontaneity was revealed again today when he cracked two jokes after his first Angelus prayer.

On a more serious note, he asked people to never get tired of asking God for forgiveness.

“Don’t forget this, the Lord never gets tired of forgiving, it is we that get tired of asking forgiveness,” said Pope Francis March 17 in Saint Peter’s Square.

“Let us not hear words of contempt or condone, but only words of love and mercy that invite us to conversion,” he told the crowd.

The new Pope said that the face of God is like that of a merciful father that always has patience and is always willing to forgive us.

“Have you thought about how much patience he has with you?” he asked.

Pope Francis told how he recently read a book by Cardinal Walter Kasper on mercy.

“That book has done me so much good, but don’t think I’m just trying to promote the book of one of my cardinals!” he joked. “It’s not like that!”

“It’s done me so much good because he says that mercy changes everything, it changes the world making it less cold and more fair,” said Pope Francis.

He explained that the prophet Isaiah said, “if our sins are red like scarlet, God will make them white like snow.”

Pope Francis also recalled that when the image of Our Lady of Fatima visited Buenos Aires in 1992 while he was bishop, a big Mass was celebrated for the poor, during which he heard confessions.

He recounted a conversation with “an old and very humble lady” who came to him towards the end of the Mass.

He had asked the woman, “Nonna, do you want to confess yourself?”

“But you haven’t sinned,” said the bishop to the elderly woman.

The lady said, “We’ve all sinned.”

He then responded, “But maybe God won’t forgive you.”

“God forgives everyone,” she told him.

The bishop questioned, “How do you know, madame?”

She said, “If God didn’t forgive everything, the world wouldn’t exist.”

The Pope told the crowd, with laughter in his voice, “I wanted to ask her, ‘Have you studied at the Gregorian (University)?’ because that is the knowledge that the Holy Spirit gives!”

Pope Francis then extended his greetings to all faithful and said he chose the name “Francis” to spiritually tie himself to Italy, from where his family originated.

“But Jesus has called us to form part of a new family of his Church, in this family of God walking together on the path of the Gospel,” he said.

“Let’s not forget that God never gets tired of forgiving so let’s never get tired of asking for forgiveness,” he added again.

Pope Francis ended his first Angelus prayer wishing everyone a “nice Sunday and a nice lunch.”