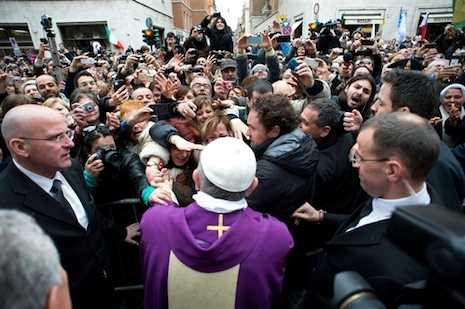 Pope Francis' love of getting up close and personal with his flock is giving his security detail a bit of agita.

The new pontiff, who used to take a packed bus or subway to work as a cardinal in Buenos Aires, does not seem content to sit in his Popemobile and wave to crowds from afar.

His willingness to suddenly wade into a sea of people presents new challenges for the Swiss Guard and other security forces.

"We are worried if there is more contact with people, because that means there's a greater possibility something can happen," Cpl. Urs Breitenmoser of the Swiss Guard told the Catholic News Service.

Breintenmoser said the pope's style "is perfectly fine" and that the security teams are nimble enough to react to his spontaneity, though it's clear those responsible for his safety are nervous.

The head of the Vatican police looked concerned when the pope greeted some 200 people after a March 17 mass at the Church of St. Anne in Vatican City and then headed right for the throngs at the barricades "I'm sure it's a nightmare for them," Claude Moniquet a security expert who heads the Brussels-based European Strategic Intelligence and Security Center and has written about protecting heads of state, told NBC News.

"The point of security plans is to limit the moments with direct contact, so this is a hole in security."

Pope John Paul II was shot and gravely wounded by Turkish national Mehmet Ali Agca in St. Peter's Square in 1981. In 2007, a German man tried to climb onto Pope Benedict XVI's open vehicle as he tooled around the square, and a 25-year-old woman with psychiatric problems tried to tackle Benedict during Christmas Eve Mass in 2009.

Moniquet said that Francis' penchant for crowd-pleasing leaves him less vulnerable to a terrorist attack than to an unstable lone wolf who blends into the audience.

The Swiss Guard and the Vatican's gendarme corps can plead with the pope to keep his distance but it probably won't work, he said.

"It's impossible to prevent a VIP like this from doing what he wants," Moniquet said. "If you have a clear and imminent threat, you can tell him no. If not, he does what he wants."

And he said a pope may be harder to sway than a prime minister or a vice president.