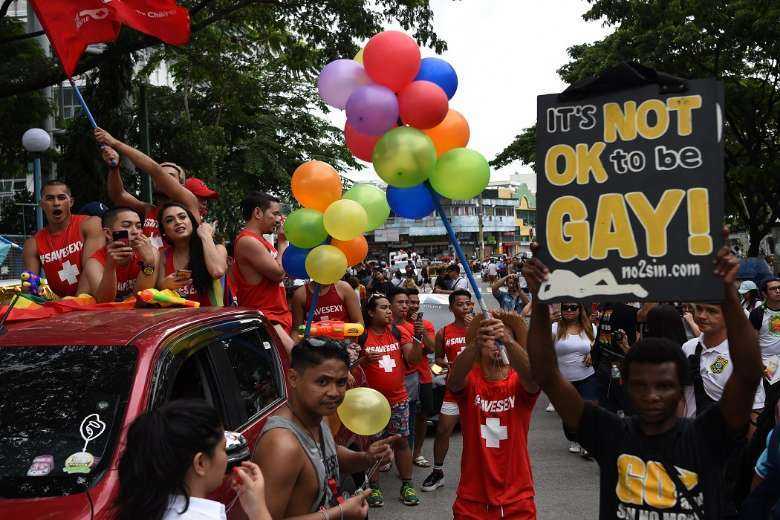 Members of the LGBTQ community walk past a man holding a placard in protest against a gay pride march at a sports complex in Marikina City, east of Manila, on June 30, 2018. (Photo: AFP)

The gay and lesbian community in the Philippines has praised Pope Francis after he urged families to support children if they were gay.

In his weekly general audience at the Vatican on Jan. 26, the pope said families of gay children must not condemn but rather accompany them in their development. Do not “hide behind an attitude of condemnation,” he said.

His comments were warmly received by members of the gay and lesbian community in the Philippines.

“We thank Pope Francis … who has once again reminded our families that every child, regardless of sexual orientation, deserves a family who will love and care for them. The words of the pope assure us that although the Catholic Church does not approve of gay marriage, it does not promote discrimination based on sexual orientation,” the group said in a Facebook post on Jan. 27.

It said there was “still a long way to go” in the fight for gay rights in the Catholic country, but hearing Pope Francis’ reminders gave them healing.

Gay, lesbian and transgender people are often bullied and discriminated in the Philippines, including in schools, families and the Catholic Church

“The words of Pope Francis are words of wisdom that remind us that love and care should still reign in every family … It promotes healing … that lesbians and gays need the same love and care from their parents,” the group added.

Gay, lesbian and transgender people are often bullied and discriminated in the Philippines, including in schools, families and the Catholic Church.

This is despite lawmakers recognizing such persecution as a pressing concern and criminalizing bullying on the basis of sexual orientation.

Back in 2012, the Department of Education introduced a child protection policy aimed at addressing bullying and discrimination in schools, including on the basis of sexual orientation or gender identity of students.