A wonderful moment in St Peter's Square on Easter Sunday 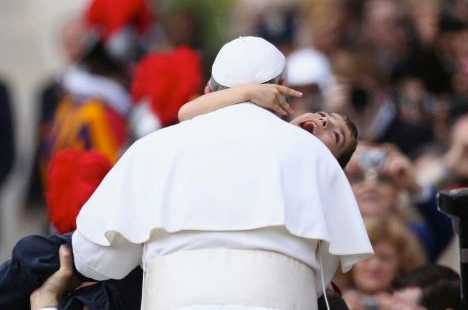 A Rhode Island couple has revealed how they were moved to tears when Pope Francis kissed their disabled eight-year-old son in front of thousands of people in St. Peter's Square on Easter Sunday.

Paul and Christina Gondreau of Johnston and their five children, including son Dominic who suffers from cerebral palsy, attended Easter Mass at the Vatican.

An usher directed Dominic and his mother to an area designated for handicapped children, said Paul Gondreau, a theology professor at Providence College who is teaching this semester in Rome.

When the pope's vehicle arrived, the usher motioned to the driver to stop and with the help of the mother, held the boy up to Pope Francis, who took the boy in his arms and kissed him.

Dominic grinned and appeared to try to bring his right arm around to embrace the pontiff, who appeared to whisper something in the boy's ear.

The Gondreaus have expressed their shock at how videos and photos of the pontiff standing in the 'popemobile' and holding their son have been shared across the world.

'It was really moving... There was not a dry eye,' his mother Christiana told CNN. 'Dominic is a people person but I think he understood that was exceptionally special.

'I think you can see that in the pictures and video because he broke out in a huge smile and wrapped his arm around the pope, which was very moving as a mother... It was a beautiful moment.'

She added that afterwards, her son seemed extremely calm.

Her husband Paul called the experience 'an incredibly moving encounter' in an article online.

At first, he was not aware that his son was being embraced by the pope until one of his other children, Lucas, screamed, 'It's Dominic!'

Only when Lucas said, 'The pope is holding Dominic', did his father look at the giant video screen and see the two embracing.

'I was speechless, and I was moved to tears, along with Lucas,' Mr Gondreau said.

He added in his article that the experience 'moved not only my family (we were all moved to tears), not only those in the immediate vicinity (many of whom were also brought to tears by it), not only by thousands who were watching on the big screens in the Square, but by the entire world'.

Afterwards, he was approached by a woman who was similarly moved and told Mr Gondreau: 'You know, your son is here to show people how to love.'

'This past month [that] is exactly what I've been thinking about,' his mother said on CNN. 'Trying to understand what Dominic's role is in this world.

'You don't ever plan to have a special child like Dominic but he has moved people. For her to verbalize it, it was just exceptionally moving... to get that so completely reaffirmed.'

Full Story: 'He understood that the moment was exceptionally special': Rhode Island parents moved to tears after Pope Francis kisses their disabled son, 8, after Easter Mass