Paolo Gabriele, the Papal employee at the center of the Vatileaks scandal, has been allowed home under house arrest. 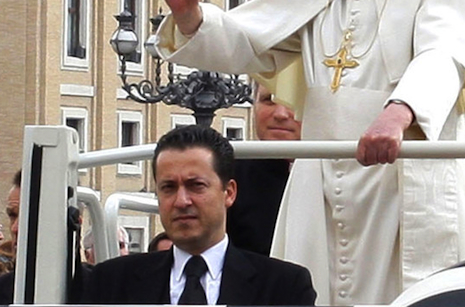 Everything Paolo Gabriele did, he did for love of the church and the pope, said the lawyers for the personal assistant to Pope Benedict XVI accused of leaking private documents. However, Carlo Fusco and Cristiana Arru, the defense lawyers, said whether or not anything Gabriele did was a crime will be up to Vatican magistrates or a Vatican court to determine. The lawyers spoke to reporters July 21 after Gabriele was allowed to leave a Vatican cell and return to his Vatican apartment to be with his wife and three children. He had been in custody for 60 days. Vatican magistrates said they had finished their interrogation of the 46-year-old papal valet and were putting him under house arrest. The magistrates are still drafting their formal decision on whether or not they believe they have enough evidence to put Gabriele on trial for his alleged part in the "VatiLeaks" scandal. Jesuit Father Federico Lombardi, Vatican spokesman, said he expected the decision to be published at the end of July or beginning of August. The report also will be given to the pope, Father Lombardi said. Pope Benedict already has received the final conclusions of a separate investigation by a commission of three retired cardinals, appointed to investigate a series of leaks of Vatican documents. Pope Benedict, after reading the reports, could decide "how to go forward," either allowing the process to continue or forgiving the man who had worked in the papal apartment since 2006, the spokesman said. Gabriele was arrested May 23 after confidential letters and documents addressed to the pope and other Vatican officials were allegedly found in his Vatican apartment. Similar documents had been published in Italian media over the previous five months; many of them dealt with allegations of corruption, abuse of power and a lack of financial transparency at the Vatican. Fusco said Gabriele cooperated with Vatican investigators "very broadly" throughout the investigation. "One thing Paolo repeated to us and to the judge was that he always was and still is motivated by a desire to do something that would be an act of helping, an act of love for the pope." Full Story: Papal butler's lawyers say client acted out of love for church, popeSource:Catholic News Service