Pope will not spend summer at Castel Gandolfo 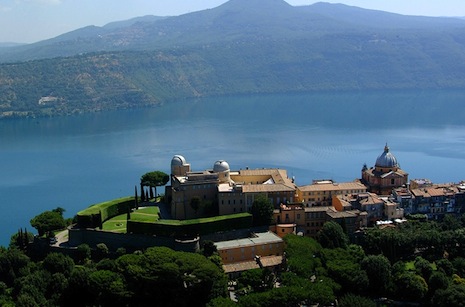 Unlike many of his predecessors since the early 1600s, Pope Francis has decided not to spend the summer months at the papal villa in Castel Gandolfo south of Rome, though he will observe a reduced schedule in July and August.

Jesuit Fr. Federico Lombardi, Vatican spokesman, told reporters Thursday that Pope Francis has decided that for the summer, he will be "based at the Domus Sanctae Marthae," the Vatican guesthouse where he has lived since his election in March.

However, Pope Francis will travel to Castel Gandolfo, 15 miles south of Rome, July 14 to lead the midday recitation of the Angelus with townspeople and pilgrims.

Lombardi did not say why Pope Francis decided not to go move to Castel Gandolfo for the summer, though he noted when Francis was the archbishop of Buenos Aires, the former Cardinal Jorge Mario Bergoglio did not go away for his summer holidays.

As for other details of the pope's summer schedule, Lombardi said Pope Francis does not plan to hold any private or special audiences between July 8 and Sept. 1. Also, his early morning Masses with Vatican employees and a short homily will be suspended during that period.

However, Pope Francis will travel to Brazil July 22-29 for World Youth Day in Rio de Janeiro.

During the month of July, Lombardi said, the pope will not hold his weekly general audiences on Wednesdays. The weekly appointment with the faithful will resume Aug. 7 at the Vatican.

Asked about the summer plans of retired Pope Benedict XVI, Lombardi said he had no firm information, but thought the retired pope wanted to remain at the Vatican in the old Mater Ecclesiae monastery, which was remodeled for his use.

After stepping down Feb. 28, Pope Benedict spent two months at the papal villa in Castel Gandolfo while work was being done on the Vatican monastery. In the summer of 2012, he spent almost a full three months in Castel Gandolfo, which is known for having cooler, fresher air than Rome.

Castel Gandolfo has a population of almost 9,000; while its position on Lake Albano ensures summertime visitors, the loss of pilgrims coming to see the pope at least on the Sundays of July and August is likely to have a noticeable economic impact.

The summertime papal escape to Castel Gandolfo is a tradition going back to Pope Urban VIII. While he was still Cardinal Maffeo Barberini, he would spend summers at the villa. Once he was elected pope in 1623, he decided it was time for the pontiffs to have a permanent summer residence there. According to Saverio Petrillo, director of the villa, about half the popes since then have followed Pope Urban's lead.

Over the centuries, war, political turmoil, illness and just plain not liking the setting accounted for some pontiffs renouncing use of the villa, Petrillo wrote.