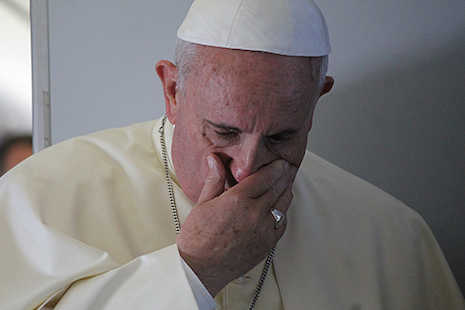 By Ann Schneible for CNA/EWTN News

Pope Francis has strongly called on the international community to help the scores of migrants who are currently trapped after attempting to cross the Bay of Bengal and the Andaman Sea.

While around three thousand migrants have managed to make their way to Indonesia, Malaysia or Thailand, thousands more are believed to be stranded in the middle of the ocean.

“I continue to follow with great concern and suffering in my heart the stories of numerous refugees in the Bay of Bengal and the Andaman Sea,” the pope said during his May 24 Regina Caeli address.

The migrants who remain stranded at sea were being transported by human traffickers. They were then abandoned on the boats by their smugglers amid crackdowns by Thailand’s government.

According to the UN High Commissioner for Refugees (UNHCR), thousands are stranded on boats in the Bay of Bengal and the Andaman Sea.

In a May 21 statement by the UN Special Rapporteurs on migrants, Indonesia and Malaysia have said they would take in 7,000 migrants and asylum seekers stranded on the sea.

About half of the migrants are reportedly from Bangladesh. The rest are Rohingya Muslims escaping persecution in Myanmar.

“I express my appreciation for the efforts made by those countries who have expressed their willingness to welcome these persons who are confronting grave sufferings and dangers,” Pope Francis said.

The pope then urged the international community to offer their humanitarian aid.

The pontiff’s remarks come amid reports of mass graves found in Malaysia, on the border with Thailand, believed to contain the bodies of smuggled migrants.