Bitterness and gossip can be the consequence, he says 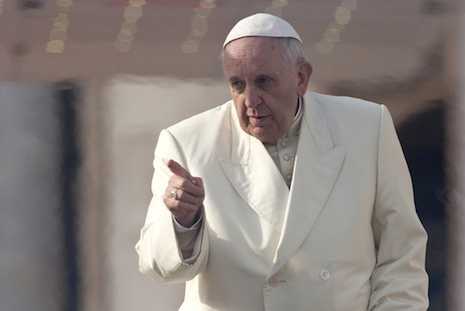 One of the dangers of a "sterile" form of celibacy is bitterness and gossip, Pope Francis told a group of priests and bishops in Caserta.

"A man who is alone ends up bitter, not fruitful, and he gossips about others," the pope said July 26 during a meeting with 123 priests working in the Diocese of Caserta and 19 bishops from Italy's Campania region. When a priest disagrees with his bishop or when bishops disagree with each other, they must air their differences -- even loudly -- but never talk behind each other's backs, Pope Francis told the group of bishops and priests. A transcript of the pope's remarks was released by the Vatican July 27.

"Say it to his face," the pope recommended. "You're a man, so if you have something against your bishop, go and tell him. There may be consequences, but pick up your cross, be a man!" Not for the first time, the pope admitted that he, too, has been tempted to gossip. "I've wondered if this isn't the consequence of a celibate life lived as sterility, not fruitfulness." A priest in Rome, he said, once told him that he was worried that so many priests and bishops are bitter and angry with each other. "When we find a priest who lives with such anger and tension, we think: This man drinks vinegar for breakfast. Then, for lunch, pickled vegetables. And, in the evening, a nice glass of lemon juice," the pope said. Pope Francis told the priests it is normal and even "healthy" to get angry, but wallowing in that, not getting it off his chest, not airing differences directly, but talking behind someone's back cause more damage. The key to a fruitful life, the pope said, lies in "double fidelity and double transcendence: being faithful to God is seeking him, opening oneself to him in prayer, remembering that he is the faithful one," and "opening oneself to others" with empathy, respect and patience. The pope told the priests that "creativity" is "a divine word," because God told Adam to care for the earth, make it bear fruit, "be creative." But as priests, that creativity must be inspired by the Holy Spirit and the only hope for that to happen is "the path of prayer," he said. "A bishop who doesn't pray, a priest who doesn't pray, closes the door, closes the path to creativity." Openness to the Spirit must be accompanied by openness to other people and to their real problems, the pope said. The only way to learn about the needs of others is to listen to them, patiently and resisting the temptation to give easy answers. "We cannot be a church closed in on itself, navel-gazing, a church that is self-referential, that stares at itself and is incapable of transcendence," he said. "Going out is not an adventure, but a journey, it is the journey to which God has called us since the moment he told Abraham, 'Leave your homeland.'"