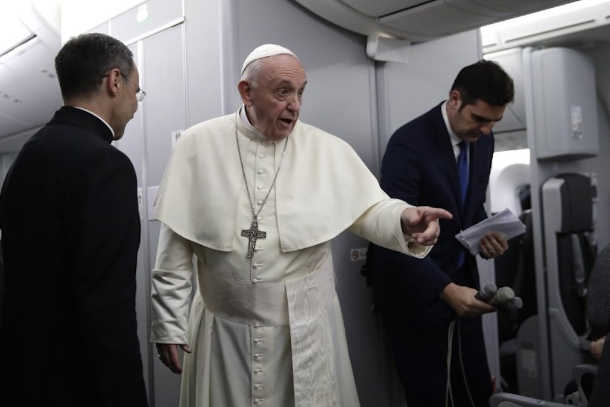 Pope Francis is flanked by Vatican spokesman Alessandro Gisotti (right) and Mauricio Rueda Beltz, organizer of the pope's trip to Panama, after speaking with reporters on the papal plane following take-off from Panama City on Jan. 27 after his appearance at World Youth Day. (Photo by Alessandra Tarantino/AFP)

The primary goal of the Vatican's summit on clerical sexual abuse and child protection in Rome in February is to help bishops understand the urgency of the crisis, Pope Francis said.

During a news conference with journalists Jan. 27 on his flight to Rome from Panama, the pope said the presidents of the world's bishops' conferences have been called to the Feb. 21-24 meeting at the Vatican to be "made aware of the tragedy" of those abused by members of the clergy.

"I regularly meet with people who have been abused. I remember one person — 40 years old — who was unable to pray," he said.

"It is terrible, the suffering is terrible. So first, they [the bishops] need to be made aware of this."

The pope's international Council of Cardinals suggested the summit after realizing that some bishops did not know how to address or handle the sex abuse crisis on their own, he said.

"We felt the responsibility of giving a 'catechesis' on this problem to the bishops' conferences," he said.

"That is why we convoked the presidents" of the conferences, the heads of the Eastern Catholic churches and representatives of the leadership groups of men's and women's religious orders.”

The meeting, he said, will address "in a clear way" what protocols bishops need to follow when handling sexual abuse.

Asked about the expectations for the meeting, especially the expectations of Catholics who have grown frustrated with the repeated reports of abuse and cover-up by some bishops, the pope said that people need to realize "the problem of abuse will continue."

But if the church becomes more aware of the tragedy of sexual abuse, the pope said, it can help others face the crisis of abuse, especially in families "where shame leads to covering up everything."

Speaking with journalists for nearly an hour, the pope was asked whether he would consider a general acceptance of married men into the Latin-rite priesthood, in a way similar to the practice of the Eastern Catholic churches.

"In the Eastern rite, they can do it. They make the choice between celibacy or marriage before they're ordained into the diaconate," he explained.

"When it comes to the Latin rite, a phrase said by St. Paul VI comes to mind: 'I would rather give my life than change the law on celibacy.'"

The pope said he personally believes that "celibacy is a gift to the church" and that while the prospect of married priests could one day be considered in remote areas that lack priests, he did not agree "with allowing optional celibacy."

"My decision is: no optional celibacy," the pope said.

"I will not do this. I don't feel like I could stand before God with this decision."

Pope Francis also was asked about his response to the political crisis in Venezuela, as well as the Vatican's seemingly neutral stance despite widespread belief that the election giving a second term to President Nicolas Maduro was rigged.

Earlier in the day, while visiting a Catholic-run hospice in Panama, the pope prayed for the people of Venezuela, and expressed his hope that a "just and peaceful solution may be sought and achieved to overcome the crisis."

Although the United States and several European countries have recognized National Assembly President Juan Guaido as the country's legitimate head of state, the Vatican has not.

Pope Francis told journalists that while he fully supports the suffering people of Venezuela, picking a side in the crisis "would be pastoral imprudence on my part and would cause damage."

"That is why I had to be — I don't like the word 'balanced' — I must be a shepherd to all and if they need help, then they must come to an agreement and ask for it," he said.

The pope said that he thought carefully about his words to the people of the country because "I suffer for what is happening in Venezuela in this moment."

"What is it that scares me? Bloodshed," the pope said. "And that is why I ask for generosity from those who can help resolve the problem."

Pope Francis also addressed the issue of abortion, which was among the themes of the Via Crucis at World Youth Day Jan. 25.

During the 14th Station — Jesus is laid in his tomb — a young pilgrim read a reflection on all the tombs where those who have died violent deaths have been laid.

"However," the reflection said, "there is one tomb that cries to Heaven and denounces the terrible cruelty of humanity: it is the tomb that opens in the wombs of mothers who rip out innocent life."

Asked how the words could be in harmony with his calls for mercy, including for women who have had abortions, Pope Francis said that the "message of mercy is for everyone, including the human being that is gestating."

Forgiving women who have had abortions is not the problem, he said; rather, it is learning to accompany women who have understood and regret what they have done.

People do not understand the trauma women go through after an abortion, the pope said. Often those who regret their abortions "feel the need to reconcile and rejoin their child."

"I tell them, 'Your child is in Heaven, talk to him, sing them the lullaby you were never able to sing to them,'" Pope Francis said.

"There, a path of reconciliation can be found between mother and child. Forgiveness with God is already there. God always forgives."