Pope wants to continue dialogue with China despite challenges Pope Francis walks past musicians after his weekly general audience at the Vatican on Sept. 1. (Photo: AFP)

Pope Francis has defended the Vatican’s controversial deal with communist China as the progress of dialogue, saying the Church should move forward despite the chances of being deceived and making mistakes.

He was speaking in a rare 90-minute interview with COPE, the radio network owned by the Spanish bishops' conference, broadcast Sept. 1.

“China is not easy, but I am convinced that we should not give up dialogue. You can be deceived in dialogue, you can make mistakes, all that ... but it is the way. Closed-mindedness is never the way,” Pope Francis said.

The Vatican faced fierce criticism from underground Catholics in China, diplomats and church leaders when it signed the deal on bishop appointments in September 2018 for two years. Despite critics accusing the Vatican of surrendering itself to the Chinese government, the deal was renewed in 2020.

“Even when I was a layman and priest, I loved to show the way to the bishop; it is a temptation that I would even say is licit if it is done with goodwill,” Pope Francis said when asked if the moral authority of the Vatican suffered when it entered into an agreement with China..

The experimental deal reportedly agrees on a procedure for Catholic communities in China to choose their bishops, with the pope approving them before their ordinations and installations.

What has been achieved so far in China was at least dialogue ... some concrete things like the appointment of new bishops, slowly

The appointment of bishops was a major hurdle in Vatican-China relations for decades. While the Vatican insisted on appointing bishops as the Church’s prerogative, the Chinese government saw it as interference by a foreign power in its internal affairs.

The deal, church observers say, ends a stalemate and could help to end the division in the Chinese Church, which started when China began appointing bishops on its own without papal approval.

Since 2018, at least five bishops have been appointed under the terms of the agreement, while the Vatican has recognized at least seven China-appointed bishops, including a bishop who died in 2018. 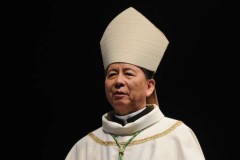 “What has been achieved so far in China was at least dialogue ... some concrete things like the appointment of new bishops, slowly ... But these are also steps that can be questionable and the results on one side or the other,” Pope Francis said.

He said a “key figure” who inspired him over China was Cardinal Agostino Casaroli, the Vatican secretary of state in the 1980s who attempted to re-establish links with the Chinese government.

The pope recalled that Cardinal Casaroli “was the man John XXIII commissioned to build bridges with Central Europe.”

“Sometimes having to talk in the open air or with the faucet open in difficult moments. Slowly, slowly, slowly, he [Cardinal Casaroli] was achieving reserves of diplomatic relations which in the end meant appointing new bishops and taking care of God’s faithful people,” he said.

“Today, somehow, we have to follow these paths of dialogue step by step in most conflict situations.”

He also said his experience “in dialogue with Islam, for example, with the Grand Imam al-Tayyeb was very positive in this, and I am very grateful to him.”

“But dialogue, always dialogue, or to be willing to dialogue. There is a very nice thing,” he said.