Pope Francis waves while leaving from celebrating mass in Genoa on May 27, as part of a one-day visit to the city. (Photo by Andreas Solaro/AFP)

Catholics, especially members of religious orders, are called to be bold, creative and consoling "missionaries without borders," Pope Francis said.

Meeting recently with members of the general chapter of the Don Orione Sisters, the pope said focusing on the call to help others and share the Gospel with them is what enables Christians to stop being preoccupied with their own worries and concerns, Catholic News Service reported.

"Mission and service to the poor put you in the position of going out and help you overcome the risks of being self-referential, of limiting your concerns to survival and of defensive rigidity," the pope told the sisters.

Those engaged in mission and evangelization, at home or abroad, must be "bold and creative," the pope said. "The comfortable criteria of 'it's always been done this way' won't work."

Modern societies and new forms of poverty pose new challenges, particularly for religious orders with a specific mission of evangelization and care for the poor, he said. "We are living in a time when it's necessary to rethink everything in light of what the Spirit is asking us."

The first step, he said, is to see and truly listen to the people one is assisting and evangelizing. The key is to use "the gaze of Jesus, which is the gaze of the Good Shepherd, a gaze that does not judge, but seeks out the presence of the Lord."

Following Jesus' example means drawing near to people for a close-up view and staying with them as long as necessary, he said. It also means having a gaze that is "respectful and full of compassion, one that heals, frees and comforts." 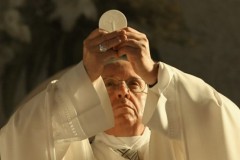 Pope warns against bad-mouthing, backstabbing each other