More care must be taken over young and old people, he says 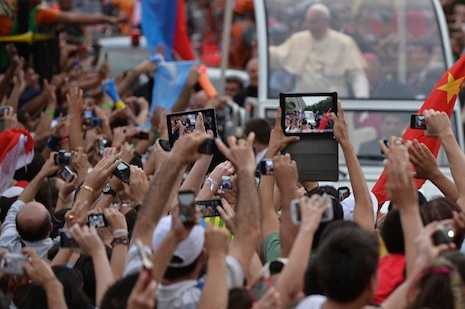 Aboard the papal plane en route to Brazil today, Pope Francis told the roughly 70 reporters traveling with him from Rome to Rio de Janeiro that he wants World Youth Day to include a greater focus on the elderly, too, fighting a "throw-away" culture that often neglects people at both ends of life.

Francis did not hold a press conference, saying bluntly, "I don't give interviews." He spoke without notes for about five minutes to reporters aboard the plane. The pope then stood at the front of the economy compartment on the plane for almost an hour, greeting each journalist one by one.

Prior to the pope's brief remarks, Jesuit Fr. Federico Lombardi, the Vatican spokesman, had asked a veteran Mexican television correspondent to say a few words to the pope in his native Spanish on behalf of the press corps.

Valentina Alazraki Crastich of Televisa told Francis that reporters often aren't saints, at least of the religious sort, and can sometimes be like lions. She presented Francis with an icon of the Madonna of Guadalupe, traditionally venerated at the patroness of Latin America.

The following is an NCR transcript of the pope's remarks, which took place roughly two hours after take-off at 8:45 a.m. Rome time. Francis spoke in Italian; the following is a rush NCR translation....

Full Story: Pope on plane: No to a 'throw-away' culture