Pope visits Benedict before flying down to Rio 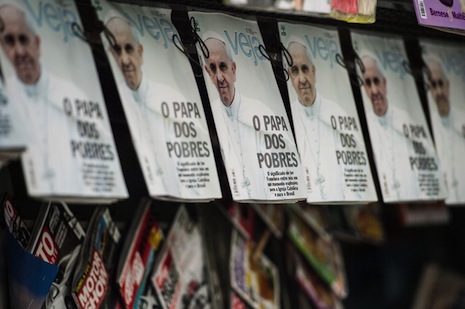 Pope Francis paid a personal visit to retired Pope Benedict XVI, informing him about the final details for World Youth Day in Rio de Janeiro and asking him to pray for Pope Francis and for the pilgrims who will gather in Rio July 23-28.

During the visit, which lasted about 30 minutes July 19, Pope Francis gave his predecessor a booklet with a detailed account of the trip itinerary, along with the times the events will be broadcast in Italy, "so that he can spiritually participate in the events and, if he'd like to, follow the broadcasts," said Jesuit Father Federico Lombardi, Vatican spokesman.Pope Francis also gave Pope Benedict one of the commemorative medals minted for the Brazil trip. On one side is a relief of Pope Francis in profile; on the reverse is a reproduction of the famous Rio statue of Christ with his arms outstretched and the words "Rio 2013 World Youth Day" -- in Portuguese.
Donate to UCA News with a small contribution of your choice
"Benedict XVI assured him of his prayers, recalling his intense and marvelous experiences at previous world gatherings with young people in Cologne, Sydney and Madrid," Father Lombardi said.Pope Benedict chose Rio as the site of World Youth Day 2013 and announced his choice at the end of World Youth Day 2011 in Madrid. He also chose the theme, "Go and make disciples of all nations."