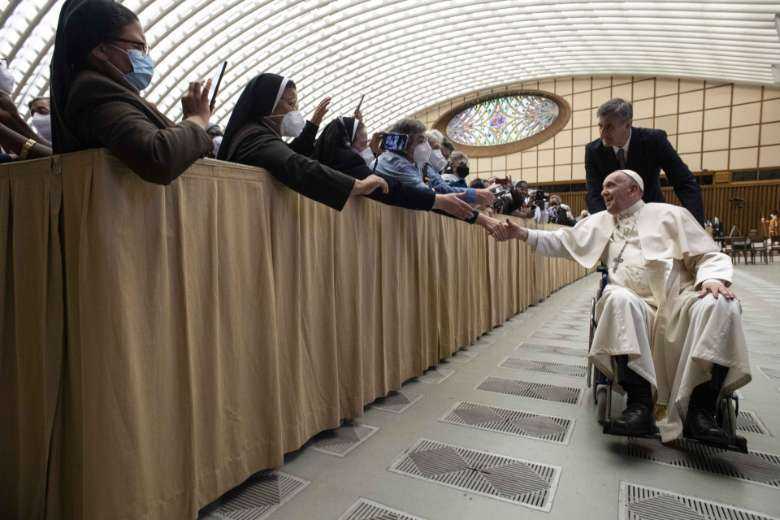 Pope Francis in a wheelchair meeting pilgrims at of an audience to the Participants to Plenary Assembly of the International Union of Superiors General in the Paul VI Hall at the Vatican on May 5. (Photo: Vatican Media/AFP)

Meeting with superiors general of women's religious orders, Pope Francis arrived in a wheelchair -- the first time he has used one publicly at the Vatican.

The 85-year-old pope has been experiencing severe knee pain for months and told an Italian newspaper May 3 that his doctor had advised rest and "injections" into the knee; the Vatican has not clarified whether the injections would be cortisone, hyaluronic acid or another therapy typically used to treat joint pain or deterioration.

When the pope met May 5 with members of the women's International Union of Superiors General, he arrived in a wheelchair pushed by his personal aide, Sandro Mariotti.

The women superiors were holding their plenary assembly in Rome May 2-6, focusing on the theme, "Embracing Vulnerability on the Synodal Journey." Pope Francis handed the UISG leaders his prepared text but responded to questions rather than reading the speech.

According to the UISG communications office, the discussion included the war in Ukraine, the need to offer long-term help to Ukraine and Ukrainians, the importance of discernment within religious communities, colonialism and the importance of being faithful to the founding charism of one's order without being "rigid."

One of the tweets from the office said the pope told them not to be "frozen nuns."

The Vatican did not immediately release a transcript of the sisters' questions and the pope's responses.

In the text handed to the superiors, Pope Francis looked at the Gospel story of Jesus washing his disciples' feet and telling them to do likewise.

"The church learns from her Master that, in order to be able to give her life in service to others, she is invited to recognize and accept her own fragility and, from there, to bow down before the fragility of others," he said.

But, he wrote, service "is not a question of servitude. To lower oneself is not to withdraw into one's own wounds and inconsistencies, but to open oneself to relationship, to an exchange that dignifies and heals, as it did with Peter, and from which a new journey with Jesus begins."

In preparing for the Synod of Bishops in 2023 and, more in general, on working to ensure the church itself is more "synodal," more collaborative and inclusive, he said, "I count on you, dear sisters, to accompany God's holy people" as "experts in building communion, in fostering listening and discernment."

"I count on you," he wrote, "so that the synodal process that we are living in the church may also take place within your institutes, where young and old exchange their wisdom and visions of consecrated life; where all cultures sit at the same table of the kingdom; where stories are processed in the light of the risen Jesus and his forgiveness; (and) where the laity can participate in your spiritualities."

Pope Francis also said that "synodal renewal" would involve communities of religious women caring for one another, especially for "small congregations or those that are decreasing to the point of finding sustainability difficult."

Synodality also must be practiced within religious orders, he said, leading sisters to ponder and pray about the changes God may want in the ministries they perform and, particularly, "in the way we live the service of authority."

While the sisters should "not be afraid in this search for new ministries and new ways of exercising authority evangelically," they should take care that it not be "a theoretical and ideological search -- ideologies mutilate the Gospel -- but a search that starts from approaching the feet of wounded humanity and walking alongside wounded brothers and sisters, beginning with the sisters of your communities."