Pope urges total ban on use, production of landmines

Such weapons have 'no reason for existing in human society' 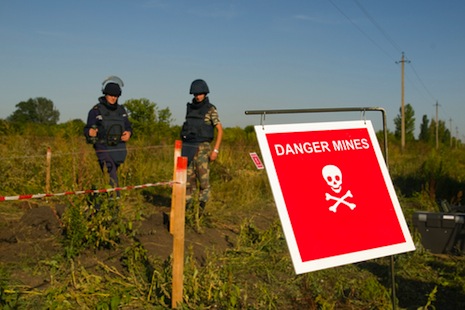 The legacy of landmines has long been a problem in Asian countries including Cambodia, Sri Lanka and Afghanistan (Photo: Shutterstock)

Landmines wound innocent civilians, "prolong war and nurture fear" long after conflicts have ended, Pope Francis told delegates working on the full implementation of an international treaty banning the production and use of anti-personnel mines.

"Reduce the stockpile of weapons! Ban weapons that have no reason for existing in human society and instead invest in education, healthcare, saving our planet and building societies marked by more solidarity and brotherhood," the pope said in a written message to representatives at the treaty review conference in late June.

Cardinal Pietro Parolin, Vatican secretary of state, sent the message in the pope's name to the conference in Maputo, Mozambique, a nation that in the early 1990s became a symbol of the tragedy of landmines and their effects, particularly on children killed or maimed when they went into a mined field.

The victims of landmines, the message said, "carry -- on their bodies and in their lives -- signs of an inhumane weapon, an irresponsible weapon, a weapon of cowards."

For civilians in former war zones, "the environment around them is a constant threat when it should be a source of fruitfulness, development and the joy of living."