Pope urges new archbishops to practice what they preach

Says 'there is no great need for masters, but for courageous witnesses' 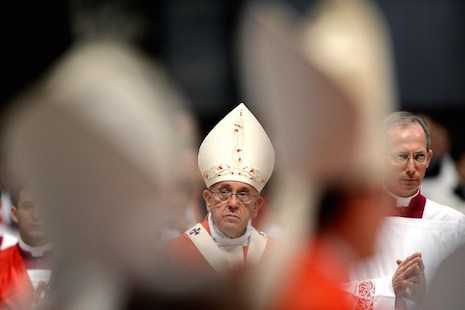 Pope Francis (center) leaves at the end of a mass for the investiture of the pallium, a liturgical vestment that symbolizes the bonds of hierarchical communion, on the new metropolitan archbishops on Monday at the Vatican (AFP Photo/Filippo Monteforte)

During his Mass for the feast of Saints Peter and Paul on Monday, Pope Francis called on the Church's new archbishops to be courageous witnesses who are not ashamed of Christ, and who are convinced by what they themselves teach.

“Kingdoms, peoples, cultures, nations, ideologies, powers have passed, but the Church, founded on Christ, notwithstanding the many storms and our many sins, remains ever faithful to the deposit of faith shown in service,” the Roman Pontiff said during the homily for his June 29 Mass, addressing the 46 new metropolitan archbishops installed over the past year.

During the Papal Mass for Saints Peter and Paul, the Bishop of Rome bestows a vestment known as a pallium on the archbishops who have been installed within the past year. The pallium, a white woolen vestment worn around the neck and above the chasuble, is a symbol of archbishops' communion and close ties with the Church of Rome.

“Today there is no great need for masters, but for courageous witnesses, who are convinced and convincing; witnesses who are not ashamed of the name of Christ and of his cross; not before the roaring lions, nor before the powers of this world.”

The pope added that, in being witnesses to the faith, archbishops should practice what they preach.

“The most effective and authentic witness is one that does not contradict, by behavior and lifestyle, what is preached with the word and taught to others!”

Drawing from the reading from the Acts of the Apostles, which recounts St Peter's imprisonment, the pope, not wishing “to dwell on these atrocious, inhuman and incomprehensible persecutions,” the likes of which still occur today, instead focused on the courage of the apostles and the early Christians.

“This courage carried forward the work of evangelization, free of fear of death and martyrdom, within the social context of a pagan empire,” the pope said.

Pope Francis centered his homily on three examples in the life of these early Christians and apostles — prayer, faith, and witness — which today's Christians are called to follow.

First, the “call to prayer”: citing the account of St Peter's imprisonment, and the Church's “earnest prayer for him,” the Roman Pontiff reflected on the importance of persistent prayer within the Christian community.

“The community of Peter and Paul teaches us that the Church at prayer is a Church on her feet, strong, moving forward! Indeed, a Christian who prays is a Christian who is protected, guarded and sustained, and above all, who is never alone.”

The pope spoke of the angel rescuing St Peter from prison, as recounted in Acts, and the “many times the Lord has heard our prayer and sent us an angel” during difficult times.

“Who comes to snatch us from the hands of death and from the evil one; who points out the wrong path; who rekindles in us the flame of hope; who gives us tender comfort; who consoles our broken hearts; who awakens us from our slumber to the world; or who simply tells us, 'You are not alone'.”

Next, Pope Francis spoke on the “call to faith” demonstrated by the early Christians, turning to the day's second reading in which St Paul speaks of God rescuing him “from every evil”.

“How many forces in the course of history have tried, and still do, to destroy the Church, from without as well as within, but they themselves are destroyed and the Church remains alive and fruitful!”

Finally, Pope Francis spoke of how Saints Peter and Paul give Christians today the “call to witness” to the faith.

“A Church or a Christian who does not give witness is sterile; like a dead person who thinks they are alive; like a dried up tree that produces no fruit; an empty well that offers no water!”

The pope continued: “The Church has overcome evil thanks to the courageous, concrete and humble witness of her children.”

Pope Francis then turned to the archbishops, calling them to be “masters of prayer,” “masters of faith,” and “men of witness."

He explained to them the significance of the palliums, saying: “It is a sign which represents the sheep that the shepherd carries on his shoulders as Christ the Good Shepherd does … a symbol of your pastoral mission.”

“I wish to entrust you with this call to prayer, to faith and to witness.”

Pope Francis blessed the archbishops' palliums during Monday's Mass; however, the archbishops will be officially imposed with the vestments in their respective dioceses by the local apostolic nuncio, rather than by the pope in the Vatican.