Pope Francis has urged bishops from throughout Eastern Europe to recognize mistakes in their handling of sexual abuse in order to open "new horizons of love and reciprocal service."

Speaking Sept. 19 in a video message on the opening day of a church-sponsored conference on child protection in the Polish capital, the pope recalled how he encouraged leaders of bishops' conference who met with him in Rome in February 2019 to ensure that "the well-being of victims might not be sidelined in favor of the misguided concern for the reputation of the institutional church."

"Our expressions of sorrow must be converted into concrete pathways of reform to both prevent further abuse and to give confidence to others that our efforts will bring about real and reliable change," the pope said.

Church representatives and child protection experts from 20 countries are attending the four-day conference, which was organized by the Pontifical Commission for the Protection of Minors and the Polish bishops' conference.

Pope Francis said he hoped the meeting would "truly touch the future of the church in Central and Eastern Europe" and "the hearts of Christians as well." He said the church should have "nothing to fear" in addressing clergy sexual abuse.

"Recognition of our errors and failings can certainly make us feel vulnerable and fragile. But it can also present a moment of splendid grace, a moment of self-emptying that opens new horizons of love and reciprocal service," the pope said.

"I urge you to be humble instruments of the Lord, at the service of the victims of abuse, considering them as companions and protagonists of a common future," he added.

In another address, an American cardinal heading child protection for the Vatican called for change "in all aspects of the church's life," and for victims' testimony to be received "with utmost reverence."

"Conversion at both the personal and institutional level is at the heart of the process of renewal," Cardinal Sean P. O'Malley of Boston, president of the pontifical commission, told attendees.

"It is important we all maintain a focus on providing accessible, welcoming and non-judgmental opportunities for survivors and their loved ones to contact and engage in dialogue with the local church," he said. 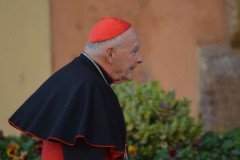 Former US cardinal McCarrick pleads not guilty to sex assaults The cardinal acknowledged that many East European priests had "suffered or given their lives in defense of the faith," but added that the global spread of the abuse crisis now required the church to avoid defensiveness and offer "a deep listening to survivors."

Also addressing the conference, the president of the Polish bishops' conference said Pope Francis noted in his 2019 motu proprio, "Vos Estis Lux Mundi" ("You are the light of the world"), that safeguarding was required not just for children, but for everyone vulnerable to "abuse of power, deceit or coercion."

"It is not uncommon for the perpetrator to make the victim believe what he is inducing and coercing them to do does not constitute any evil," Archbishop Stanislaw Gadecki of Poznan said.

"It must be honestly acknowledged we have committed many negligent acts toward the victims in the church. This kind of facing the truth, however, should not lead us to defeatism or despair," he said.

Sexual abuse has been reported across Eastern Europe by clergy from the Catholic Church and other denominations, triggering hostile reactions from politicians and the media.

In Poland, where 10 mostly retired bishops have faced sanctions for ignoring abuse allegations, a Sept. 15 report on abuse in the Dominican religious order confirmed widespread cover-ups and accused a former provincial, in custody since March, of raping nuns.

Archbishop Gadecki said the Polish bishops appointed a child protection coordinator in 2013 while ensuring all dioceses and religious orders had care specialists. The conference also established a foundation for prevention and victim support.

They do not want to be treated as nuisances disturbing the sacred peace, as intruders or, worse, as people acting against the church

And an organizing committee member, Ewa Kusz, said in a Vatican Radio interview Sept. 19 that many East European victims remained "completely alone in their suffering."

"They expect the church to recognize the abuse not as a sin committed by a sinner who needs to be pardoned, but as a criminal act that wounded them," Kusz, a Krakow-based psychologist, said.

"They do not want to be treated as nuisances disturbing the sacred peace, as intruders or, worse, as people acting against the church."

He explained, however, that financial and personnel resources, and "cultural attitudes towards speaking out," still varied widely, and said bishops' conferences would now be expected to produce annual reports detailing allegations and proceedings.

Father Zollner described how reporting abuse had posed particular problems in Eastern Europe, where many people had grown up under communist rule distrusting "the authorities and law enforcement."

"The churches were under siege for decades, and there has certainly been some difficulty in dealing openly with criticism and wrongdoing," he said.

"People don't feel comfortable speaking about sexuality, let alone sexual misbehavior by authority figures. ... We have to acknowledge this will be a long journey."