“We all have to give something,” he says in homily 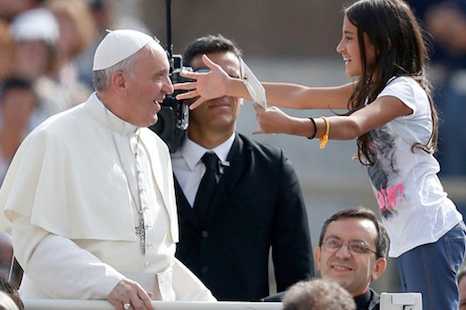 Catholics should not be indifferent to politics, Pope Francis said, but should offer their suggestions, as well as prayers that their leaders may serve the common good in humility and love.

In his Sept. 16 daily homily at Santa Marta, the Pope rejected the idea that “a good Catholic doesn’t meddle in politics.”

“That’s not true. That is not a good path,” he said, according to Vatican Radio. “A good Catholic meddles in politics, offering the best of himself, so that those who govern can govern.”

“None of us can say, ‘I have nothing to do with this, they govern,’” Pope Francis told those present for the Mass. Rather, citizens are responsible for participating in politics according to their ability, and in this way are responsible for their leadership.

“Politics, according to the Social Doctrine of the Church, is one of the highest forms of charity, because it serves the common good,” he explained. “I cannot wash my hands, eh? We all have to give something!”

He noted that it is sometimes common for people to speak only critically of their leaders, to complain about “things that don’t go well.”

Instead of simply complaining, we should offer ourselves – our ideas, suggestions, and most of all our prayers, the Holy Father said.

Observing that prayer is “the best that we can offer to those who govern,” he pointed to St. Paul’s letter to Timothy inviting prayer for the conversion and strong leadership of those in authority.