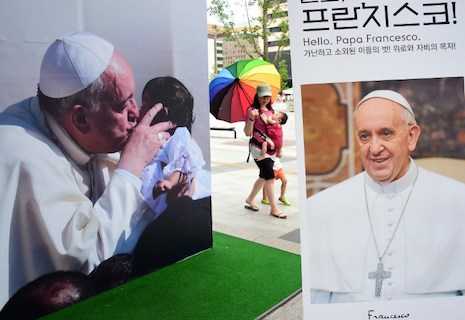 A woman and child walk past posters advertising a photo exhibit of Pope Francis in Seoul, where the pontiff will arrive on Thursday morning. (AFP photo/Jung Yeon-Je)

Pope Francis travels to South Korea this week with a message of peace for the divided peninsula on his first papal visit to Asia, where the Catholic Church is undergoing dramatic growth.

The 77-year-old will fly into Seoul on Wednesday in a trip also aimed at making up for his predecessor Benedict XVI never visiting Asia during his whole eight-year papacy.

Vatican watchers say Francis will address the whole continent on the seven-day trip where the number of Catholics, although only 3.2 percent of the population, is rocketing.

With the Roman Catholic Church dogged by increasing secularism in the West, "it's a chance for the pontiff to flash a thumbs-up to a region upon which Catholicism is increasingly reliant", said Vatican expert John Allen, who writes for the Boston Globe.

In January, the pope will return to Asia on a trip to Sri Lanka and the Philippines – the region's largest Catholic country – to nurture the burgeoning number of faithful and would-be clerics from China to India, Myanmar and Vietnam.

As a young man, Francis dreamed of becoming a missionary in Japan, where Catholics in the 18th and 19th centuries kept their faith alive without the help of priests, who had been expelled or murdered by the imperial government.

In South Korea he will preside over a beatification ceremony for 124 Korean martyrs and is expected to use his speech to warn of a recent escalation in anti-Christian persecution from Afghanistan to Iraq, Syria and Somalia.

In the last census to include religious affiliation in 2005, close to 30 percent of South Koreans identified themselves as Christian. The majority are Protestants, but Catholics are the fastest growing group with around 5.3 million adherents – just over 10 percent of the population.

In North Korea, the Church is only allowed to operate within the confines of the state-controlled Korean Catholics Association (KCA). The country is repeatedly ranked worst for oppression of Christians by international watchdogs.

The pope will hold a mass in Seoul's cathedral for reconciliation between the two Koreas, which remain technically at war because the 1950-53 conflict ended in a ceasefire rather than a peace treaty.

Seoul's Cardinal Andrew Yeom Soo-jung, who crossed into North Korea for a historic one-day visit in May, said he hoped Francis would bring about "a great miracle" for dialogue between Korea's Communist and capitalist halves.

Reports that the pope may pray at the demilitarised zone between the two Koreas – in an echo of his impromptu stop at Israel's separation wall during a trip to Bethlehem earlier this year – were ruled out by the Vatican.

However, spokesman Federico Lombardi said "the pope is always capable of surprises".

Religious watchers have also speculated that Francis might take the chance to travel on to Beijing in a bid to ease a bitter feud between the Church and China's Communist regime, which has its own state-controlled Catholic Church.

During the visit to South Korea, he will meet relatives of the victims of the Sewol ferry, which sank in April with the loss of some 300 lives – most of them children.

He will also meet Korean women forced into sex slavery for Japanese troops during World War II, invited by organisers to attend the pope's August 18 mass.

The pontiff, a champion of the weak and downtrodden, will visit a centre for the handicapped and is also expected to reach out to those left behind by the country's rapid economic growth, repeating his famous call for "a poor Church for the poor".

"The Korean Church is learning to pay attention to the poor, but today there is still a risk of it coming across as a Church of the rich, for the rich," Vincenzo Bordo, a lay missionary in South Korea, told the Vatican Insider website.

"Many hope that the Pope's visit will act as an impetus" for change, he said. AFP