Pope Francis has made yet another break with tradition. 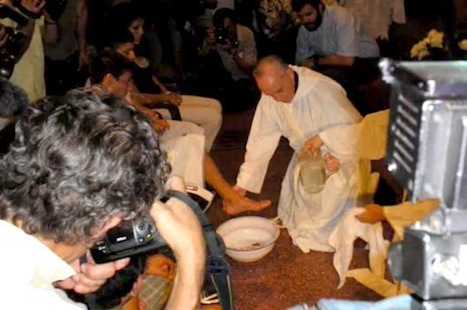 Pope Francis has decided to celebrate the Holy Thursday Mass of the Lord's Supper in a Rome juvenile detention facility and wash the feet of some of the young detainees.

It marks a change in venue of the previously scheduled March 28 Holy Week event from St. Peter's Basilica to Rome's Casal del Marmo prison for minors.

While the practice of his predecessors has included washing the feet of priests or laypeople, the ceremony was normally held in either St. Peter's Basilica or the Basilica of St. John Lateran.

The Vatican said that, as archbishop of Buenos Aires, Pope Francis used to celebrate the Mass of the Lord's Supper -- which reflects on the call to imitate Christ by serving one another -- in prisons, hospitals or shelters for the poor and marginalized.

"With the celebration at Casal del Marmo, Pope Francis will continue that practice, which must be carried out in a context characterized by simplicity," the Vatican said in a statement Thursday.

The Mass of the Lord's Supper highlights "the commandment of love" and service through the ritual of washing the feet of others, the statement said.The other Holy Week and Easter events and celebrations were expected to remain as previously scheduled, the Vatican said, including the pope celebrating the morning chrism Mass on Holy Thursday in St. Peter's Basilica, in which the chrism and the oils used in the sacraments of baptism, confirmation, ordination and the anointing of the sick are blessed.

At the start of his pontificate, Pope Benedict XVI reversed a 20-year Vatican tradition of washing the feet of priests during the Holy Thursday evening Mass. In 2006 and 2007, he returned to a practice in effect before 1985, when he washed the feet of 12 laymen from the Diocese of Rome during the evening Mass.

From 2008 onward, Pope Benedict switched back to washing the feet of 12 priests from the Rome diocese.

From 1985 to 2001, Blessed John Paul II washed the feet of 12 priests each year during the Holy Thursday Mass. Beginning in 2002, because of his weakened physical condition and his inability to walk, the pope had cardinals perform the foot-washing ritual, but always washing the feet of 12 priests.

However, in the first six years of his pontificate, Pope John Paul continued Pope Paul VI's practice of washing the feet of laypeople.

For several years, Pope John Paul washed the feet of elderly laymen, including a group of homeless men living at a shelter run by the Missionaries of Charity in 1980. In 1983, he washed the feet of 12 young men from Italy's Boys Town, and in 1984 the 12 were representatives of Rome parish youth groups.

Pope Benedict visited the Casal del Marmo prison in 2007, meeting with the young detainees in a gym and celebrating Mass with them in the prison chapel.