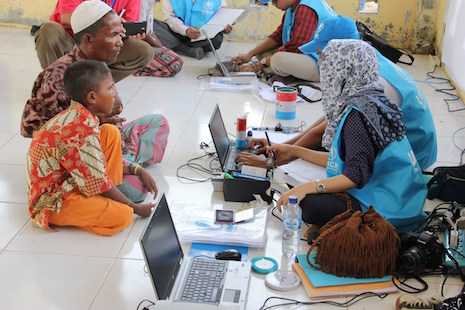 Staff from the U.N. Refugee Agency verify the identities of migrants and asylum seekers in Kuala Cangkoi in Indonesia's Aceh province, after boatloads of people were rescued off the coast in May. (Photo by Ryan Dagur)

Police chiefs and bishops are called to work together to assist the victims of human trafficking and help them find freedom and healing, Pope Francis said.

"You … by your mission are called to be near to these victims and to accompany them on a pathway of dignity and freedom," the pope wrote in a message addressed to the Santa Marta Group, an international network of senior law enforcement chiefs and church leaders.

The group gathered in late October in the Spanish town of San Lorenzo de El Escorial, near Madrid. Also in attendance was Queen Sofia of Spain, displaying her support to help find ways to eradicate the modern form of slavery.

The Santa Marta Group, an international initiative inaugurated by the pope to raise awareness and fight human trafficking, met for its third time just weeks after the United Nations launched its 2030 Agenda for Sustainable Development.

The U.N. Sustainable Development Goals include a call to all members of the United Nations to "take immediate and effective measures to eradicate forced labor, end modern slavery and human trafficking and secure the prohibition and elimination of the worst forms of child labor."

In his message, the pope referred to the development goals, saying, "Today, the 193 states that belong to the U.N. have a new moral imperative to combat human trafficking, which is a real crime against humanity."

The pope called on police chiefs and bishops to carry out the delicate task of "ensuring that governments reach the victims in a direct, immediate, constant, effective, and concrete way."

He encouraged members of the Santa Marta Group to turn to the United Nations as a source of newfound support.

The success of the group depends heavily on the cooperation among police chiefs and bishops, the pope said. Each has their own mission, and when communicated successfully to each other, there will be an effective and concrete way to handle the problem at hand, he said.

"With the help of God and your cooperation, this indispensable service will be able to liberate the victims of new forms of slavery, rehabilitate the excluded, unmask the traffickers and those who create this market, and provide effective help to cities and nations," the pope said.