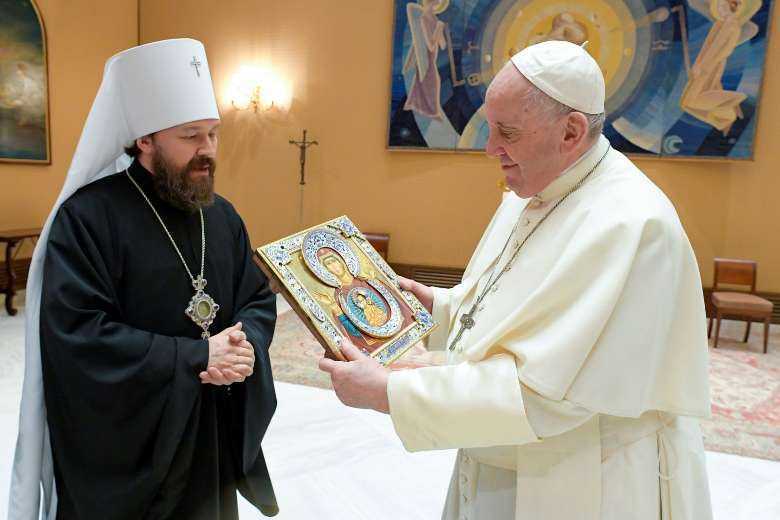 Pope Francis meets Metropolitan Hilarion of Volokolamsk for a private audience in the Vatican. (Photo: AFP)

Pope Francis met with Metropolitan Hilarion of Volokolamsk, head of external relations for the Russian Orthodox Church, for an hour at the Vatican on Dec. 22.

The two met "in a spirit of fraternity" and discussed a number of issues "of common concern" as well as the shared desire and commitment to seek responses that were "concrete, humane and spiritual," according to a communique by the Vatican.

While the Vatican statement made no mention if they also discussed a possible encounter between the pope and Patriarch Kirill of Moscow, the pope had told reporters Dec. 6 that he was meeting with Metropolitan Hilarion end of December and that he hoped that meeting would lead to an encounter soon between him and the patriarch.

"A meeting with Patriarch Kirill is not far from the horizon," the pope had told reporters.

"I am always available, I am also willing to go to Moscow: to talk to a brother, there is no need for protocols. A brother is a brother before all protocols," he had said, and, like brothers, "they belong to the same Mother, Mother Church," even when they are "a bit divided."

At the Dec. 22 meeting, the pope and Metropolitan Hilarion also exchanged gifts and thanks for well-wishes for recent birthdays. The pope turned 85 Dec. 17 and Patriarch Kirill celebrated his 75th birthday Nov. 20.

"The pope expressed his feelings of affection and closeness to the Russian church and Patriarch Kirill," recalling their "journey of fraternity" and meeting in Havana in 2016, the Vatican said.

Metropolitan Hilarion gave the pope an icon of Our Lady of the Sign and Pope Francis gave the metropolitan a mosaic of Our Lady of the Ladder or of the "synkatabasis," which represents the Mother of God with her son, as well as a number of papal documents including the World Day of Peace message for Jan. 1, 2022.