The pope had canceled vital public events due to nerve pain, which struck him at the end of 2020. (Photo: AFP)

Pope Francis has canceled three events on Sunday and Monday due to a recurrence of sciatica, a kind of severe back pain.

However, the 84-year-old pope went ahead with the Angelus on Sunday, Jan. 24, but he did not deliver Mass, nor evening prayers at St Paul's Basilica.

The Sunday Mass was celebrated instead by Archbishop Rino Fisichella, president of the Pontifical Council for Promoting the New Evangelization.

A meeting with the diplomatic corps and the annual "state of the world" address, slated for Jan. 25, has also been rescheduled.

The pontiff will not lead the vespers to conclude the Week of Prayer for Christian Unity on Jan 25.

Cardinal Kurt Koch, president of the Pontifical Council for Promoting Christian Unity, will lead the event at St. Paul Basilica.

Sciatica is caused due to problems in the sciatic nerve and can hit a person's lower back and runs down the back of the thigh and leg. It happens due to a slipped disc in the spine.

Symptoms include shooting pains in the back of the legs.

During an in-flight media briefing, the Pope spoke about it while returning from a trip to Brazil in July 2013.

He said that "the worst thing" that had happened in the first four months of his pontificate "was an attack of sciatica — really! — that I had the first month because I was sitting in an armchair to do interviews, and it hurts." 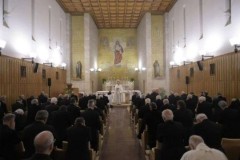 The pope had canceled vital public events due to nerve pain, which struck him at the end of 2020.

He skipped New Year's ceremonies a few weeks ago, prompting concern about his international trip to Iraq in March.

Papal trips are grueling with multiple appointments each day, long Masses and receptions, and multiple transfers via car and plane.