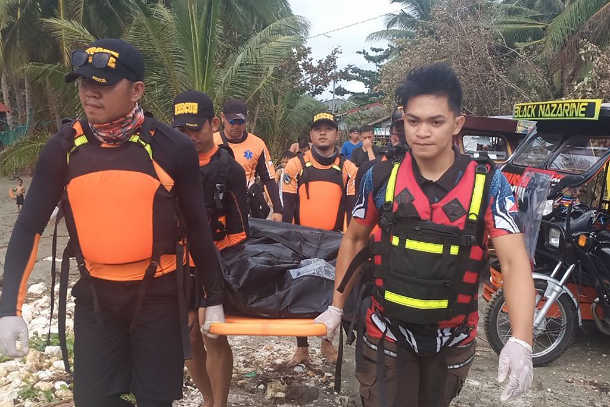 Rescuers carry a body believed to be one of several missing fishermen in Borongan, Eastern Samar province, on Dec. 27 after Typhoon Phanfone battered the central Philippines on Christmas Day. (Photo: AFP)

Reciting the Angelus with thousands of people in Rome on Dec. 26, Pope Francis asked them to join him in reciting the "Hail Mary" for the victims of Typhoon Phanfone in the Philippines.

The pope told the crowd in St. Peter’s Square that he shared the suffering of the Filipino people, "whom I love very much."

"I pray for the numerous victims, for the injured and for their families," he said.

The typhoon, which made landfall on Christmas Eve, caused at least 28 deaths. Many people are still missing and tens of thousands of people were forced to evacuate their homes.

Phanfone battered several central Philippine islands on Christmas Day, forcing at least once province to declare a state of calamity.

Media reported that most of the fatalities were from the province of Iloilo, where at least 13 people were reported killed.

The death roll rose on Dec. 27 as information came in from badly hit areas where internet and mobile phone networks had been cut.

Most of the deaths were due to drowning, falling trees and #electrocution.

The province of Leyte, which was the first to be hit by the typhoon, declared a state of calamity and reported damage to fisheries, livestock and crops worth close to US$1m.

More than 58,000 people were forced to evacuate across several provinces as the predominantly Catholic nation was celebrating Christmas.

Phanfone followed a similar path to Typhoon Haiyan, which killed at least 6,000 people in 2013.

Some tourist areas, including the popular resort island of Boracay, were also damaged.

Thousands of Christmas travelers had their flights and ferries canceled due to the typhoon. Some 115 domestic flights were canceled and more than 15,700 passengers left stranded.

Earlier this month, Typhoon Kammuri, the 20th to hit the Philippines this year, killed 13 people and damaged more than 8,000 houses.