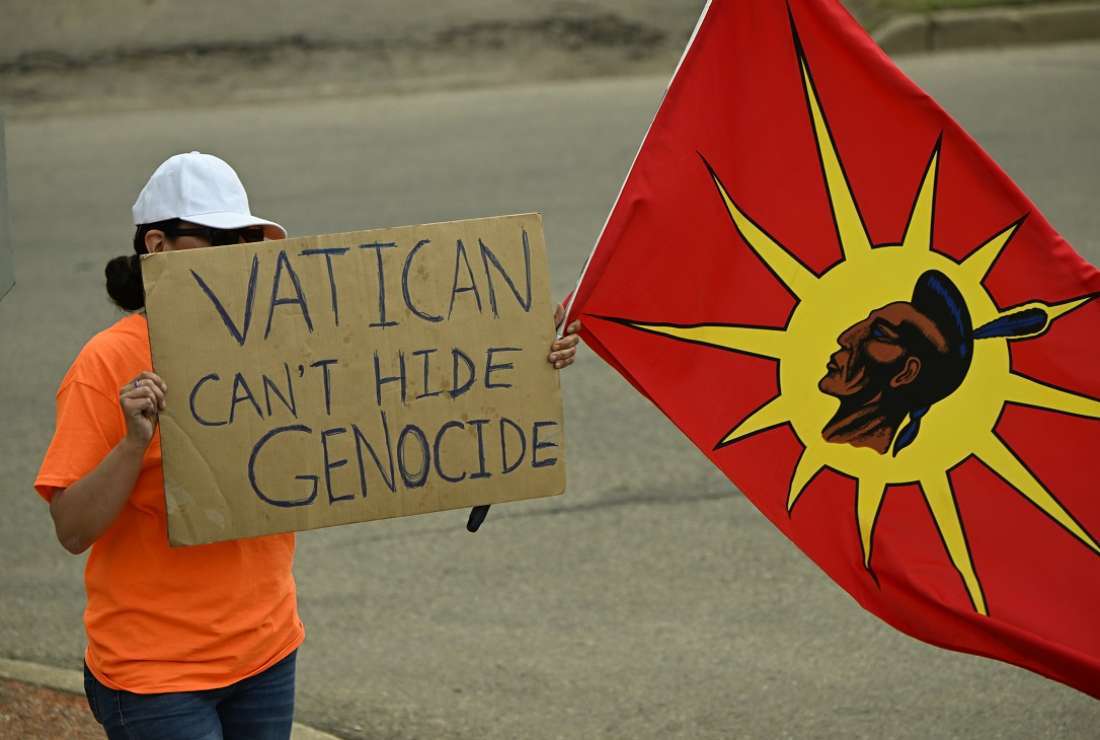 A protester holds a sign as Pope Francis arrives in Edmonton, Canada, on July 24 for a five-day official visit. (Photo: AFP)

The hurt, pain and damage to the lives of countless indigenous children top Pope Francis’ agenda on his visit to Canada. Climate change damage to their ancestral lands and environment by big business is also on his mind, and which he will speak forcibly and clearly about.

Pope Francis has strongly commented on destructive climate change resulting from rich nations' emissions of greenhouse gases seen in many devastating wildfires, droughts, floods and poverty everywhere. This has been caused by failed policies of governments and big business on a scale never seen before. Everything is connected.

Pope Francis challenged them recently on the World Day of Prayer for the Care of Creation and called on world leaders to address climate change and growing poverty, especially among indigenous peoples. This Sunday, he visited Canadian indigenous people to offer apologies and help to the victims and survivors of abuse in Church-run, government-funded residential schools. He also advocates for a halt to the government’s destructive environmental policies affecting the indigenous people of Canada.

"Prey to our consumerist excesses, she weeps and implores us to put an end to our abuses and to her destruction"

His appeal to rich nations is that they must act to stop the destruction caused by climate change since they have been destroying the environment for 200 years, silencing and corrupting nature’s song of life and rebirth.

“Tragically, that sweet song is accompanied by a cry of anguish. Or even better: a chorus of cries of anguish. In the first place, it is our sister, Mother Earth, who cries out. Prey to our consumerist excesses, she weeps and implores us to put an end to our abuses and to her destruction,” he said.

Pope Francis repeated the message he made last year “In the name of God.” He called on governments to stop enabling businesses and multinational corporations from destroying the natural world through mining. “To stop destroying forests, wetlands, and mountains, to stop polluting rivers and seas, to stop poisoning food and people,” he said. They have an “ecological debt” to pay for they are responsible for most of the damage to the environment and are the root cause of poverty and hurt to the indigenous people in the world.

Pope Francis was to go to the Canadian Arctic to Iqaluit, supposedly the coldest place in the Northern Hemisphere but with global warming, it is losing the people’s traditional source of food. His first visit was to the indigenous people in Edmonton, and later Iqaluit and Quebec, marked with simplicity and no official welcome.

Besides addressing the devastating effects of the non-stop burning of coal, oil and gas to fuel the world economy, Pope Francis was also to speak on the devastating effects of systematic physical, psychological and sexual abuse of indigenous children in the Canadian government’s Church-run residential schools where hundreds of thousands were incarcerated and forced to abandon their native culture and values.

"Over a thousand secret graves of abused children who died of loneliness, neglect and abuse have been discovered in recent years"

Priests and nuns paid by the Canadian government dragooned the children into strictly disciplined schools where bullying, hunger, disorientation and hopelessness dominated their lives as they despaired of their parents’ love and care. This led to great suffering for the children who were never loved, and when they became adults, were unable to love their children sufficiently causing great social and psychological pain in disturbed, impoverished and alienated people.

The visit of Pope Francis will be of huge significance, being centered on their community in Edmonton and not on the political capital, Ottawa. He will give no comfort to the political regime and Church officials who covered up the historical abuse and in recent years allegedly siphoned off to their own projects the restitution money that was due to the surviving victims and their families.

Over a thousand secret graves of abused children who died of loneliness, neglect and abuse have been discovered in recent years and previous agreements and settlements have been violated by the betrayal of political and Church authorities to their eternal shame. Now, Pope Francis has to be the one to make amends and apologize for the past wrongdoing of sinful Church officials.

There was no pomp or ceremony at the airport arrival in Edmonton. He was greeted by representatives of the indigenous peoples and victims and survivors of the residential schools. "The first time we will hear him speak will be at a former residential school site with survivors and former students. This is the reason for the visit,” Deacon Pedro Guevara Mann, the director of the visit, said.

"Malnutrition, hunger and unemployment turn millions of Filipinos into slaves of poverty"

Pope Francis is also deeply concerned about the damaged environment of the indigenous people and global poverty. “Exposed to the climate crisis, the poor feel even more gravely the impact of the drought, flooding, hurricanes and heatwaves that are becoming ever more intense and frequent,” he said recently. “Likewise, our brothers and sisters of the Native peoples are crying out. As a result of predatory economic interests, their ancestral lands are being invaded and devastated on all sides, provoking a cry that rises up to heaven.”

The indigenous peoples of the Philippines are also impacted by poverty as are millions more. Poverty is spreading everywhere. In 2021, there were an estimated 698 million poor people, nine percent of the entire global population, surviving on less than US$2 a day, which is known as extreme poverty.

The children are the worst affected. In the Philippines, millions survive in infested hovels of the poorest of the poor. Malnutrition, hunger and unemployment turn millions of Filipinos into slaves of poverty. They survive by recooking the leftovers off the restaurant dinner plates of the rich diners. These are thrown into the garbage bags and are eagerly grabbed by the poor that boil them into a trash food called “pag-pag” and serve them up to thousands of hungry poor on the back streets of Manila.

That is one image of the harsh reality of poverty that the Marcos regime will have to confront and eradicate. As Pope Francis said: “In a world where there is so much wealth, so many resources to feed everyone, it is unfathomable that there are so many hungry children, that there are so many children without an education, so many poor persons.” A truth that none can ignore.