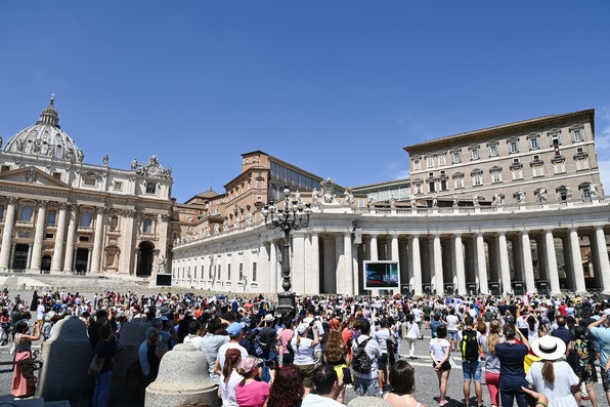 Pope Francis (R, up) delivers his speech to the crowd from the window of the apostolic palace overlooking Saint Peter's square during the Sunday Angelus prayer, on July 26, 2020 in Vatican. (Photo: Andreas SOLARO / AFP)

Pope Francis has named a U.S.-based executive from Spain to be general secretary of the Secretariat for the Economy.

The Vatican announced Aug. 4 that the position, which has been vacant since 2018, would be filled by Maximino Caballero Ledo, 60, who has worked in the area of finance at an Illinois-based health care company, Baxter International, for more than 13 years.

Born in Merida, Spain, in 1959, Caballero is married with two children and is a childhood friend of the prefect of the Secretariat for the Economy, Jesuit Father Juan Antonio Guerrero Alves.

"Of all the various career opportunities I could have imagined, this is one that would never have crossed my mind," Caballero said, according to Vatican News.

The post of general secretary, which is the No. 2 spot at the secretariat, has been vacant since 2018 when now-Archbishop Alfred Xuereb was made papal nuncio to Korea and Mongolia.

Pope Francis established the secretariat in 2014 as part of sweeping reforms to strengthen oversight of the Vatican's finances and assets and to bring the Vatican's accounting and budgeting procedures up to international standards, particularly in the areas of transparency and accountability.

Caballero has an economics degree from the Autonomous University of Madrid and his master's in business administration from Barcelona's IESE business school.

He has worked in Spain and the United States in the areas of finance and accounting, financial reporting, strategic planning, control and compliance, and risk management.

In 2007, he started working at Baxter International, where he was eventually named vice president of finance for the Americas region and the head of global finance for its pharmaceutical unit.

"The United States and Baxter have been my home for many years," he said, and "on a personal level, I admire the degree of involvement of Catholics in this country with the church and their generosity in supporting their local parishes and their social works."

He said he and the current prefect come from the same city in Spain and grew up together.

"We were very close until the end of university. From that time on, life brought each one of us on different paths, but without ever losing contact," he said. Father Guerrero called him to propose he be considered a candidate for the vacant position, he said.

"The thought is quite widespread that only priests and nuns matter in the church and that the rest of us are only spectators. However, the lay faithful have a very important task to carry out within the church," he said.

To collaborate with the Holy See and be at the service of the pope, Caballero said, "is an honor and a great responsibility for me. My experience and my work are my 'talents,' and I hope that with them I can do my part to collaborate in the economic transparence of the Holy See."