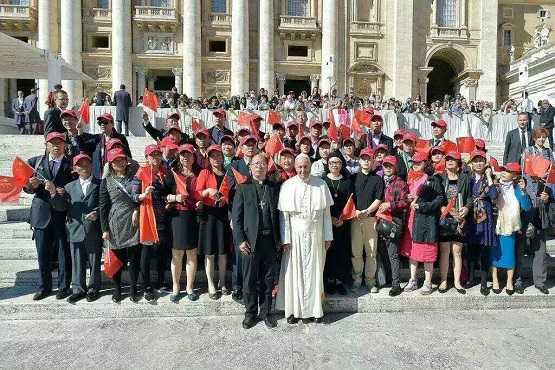 Pope Francis has met with a bishop from mainland China in the first ever public meeting between the head of the church and a Chinese bishop.

The event met a mixed reception among the open and underground Catholic communities in China due to ongoing talks between the Vatican and China's ruling Communist Party that have divided the faithful.

Bishop Xu, who is approved by the Vatican and Beijing, brought with him a group of flag waving Chinese pilgrims who joined in on posed photographs with the pontiff.

Due to the fraught nature of the Vatican's relationship with the Chinese communist government, similar meetings between the pope and a Chinese bishop were always conducted privately in the past.

China-based publishing house Faith Press published a commentary by Father Han Qingping, an active blogger in the open church community, which said the public meeting was important because of the perceived growing accord between the Vatican and Beijing, especially regards to negotiations "focused particularly on the appointment of bishops."

"Such a meeting may not be news for priests and laypeople in Europe and America or even in Hong Kong, Macau and Taiwan. But for the China Church which has gone through several decades of winters, it is undoubtedly a sign of the spring blossom," Father Han said.

"It is for the first time specially arranged for Bishop Xu and his pilgrims to meet with the pope, and to shake hands and greet him. How could it not draw our special attention?" said Father Han.

No news on Vatican Radio

Despite the significance of the Oct. 5 meeting, the Chinese service of Vatican Radio did not carry the news even though it ran a story about Pope Francis greeting a group of Wenzhou laypeople in the Vatican in May 2015.

Father John, an open priest in northern China, believed that the meeting was an "intended gesture."

"Vatican officials might want to show the event was just a coincidence. But it is known that meeting the pope, even in a public audience, needs pre-arrangement," the priest told ucanews.com.

"The greeting perhaps is to show the China-Vatican negotiation is smooth and relations are good," he added.

An underground priest in eastern China, who asked not to be named, did not agree.

"The pope has fallen into a trap as the meeting created an impression that he welcomed a bishop sent by the Chinese Catholic Patriotic Association," he said. The association is accused of controlling the church for the government.

In China, bishops who want to travel abroad have to obtain permission from the government. However, in the past some found various ways to get around such requirements.

The late Bishop John Baptist Wang Jin of Yici and Father Peter Shao Zhumin, vicar general of Wenzhou (now bishop) and his chancellor, Father Jiang Sunian are among church leaders known to have met with the head of the Catholic Church.

Bishop Wang, who was recognized by both Beijing and the Vatican, was received by Pope Benedict XVI in 2005. The Chinese authorities learned about the meeting after he returned home.

Bishop Shao and Father Jiang, who belong to the underground community that is not recognized by the government, were arrested together in Shenzhen in September 2006 after returning from a pilgrimage to Europe that included a private meeting with Pope Benedict.

The two clergy were imprisoned for an "illegal exit" from China. Bishop Shao was sentenced to nine months and Father Jiang was given 11 months because he was a "repeat criminal" due to a previous arrest for printing religious books.

The warm greeting to an open bishop on Oct. 5 is also considered a blow to the underground Catholic community, who feel like they enjoy little support from the Vatican despite their loyalty.

"It is certainly a big issue for the underground community," said a researcher in Beijing who asked not to be named.

The underground priest in eastern China said the recent meeting is in sharp contrast with the case of Bishop Shao.

Bishop Shao was recently taken away from his diocese to prevent him from presiding over the funeral of his predecessor as the gesture would mean the authority recognizing his bishop status.

"Bishop Shao and Father Jiang returned to their diocese on Oct. 8. There was no specific restriction except he could not contact the clergy in the open community. This is to prevent Bishop Shao from taking possession of the whole Wenzhou Diocese," said a source in Wenzhou.

*ucanews.com could not reach Bishop Joseph Xu Honggen for comment before deadline. 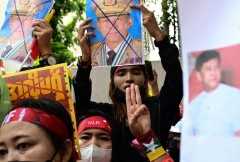