Pope laughs off complaint of driving without a seat belt

A complaint from a German lawyer that the Pope travels in his customized popemobile without the legal safety precautions has raised smiles in the Vatican. 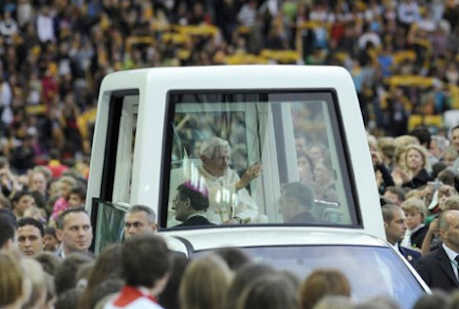 The Vatican has said that Pope Benedict XVI greeted with a smile the news that a German citizen had filed a complaint against him for not wearing a seat belt in his popemobile. The Vatican spokesman, Fr Federico Lombardi, said that the complaint was not being taken seriously at the Vatican. “It continues to provoke curiosity and smiles of amusements, beginning with the Pope himself,” Fr Lombardi said. Fr Lombardi said it was well known that the popemobile does not travel long distances, moves at a very slow speed and doesn’t generally run the risk of encountering other vehicles in its path. “The Pope turns continually to the right and to the left to greet and bless the faithful. Often he gets up and takes in his arms babies to bless, to the joy of the parents and everyone present. All these gestures presume a certain freedom of movement,” the spokesman said. Fr Lombardi added that the Vatican was “grateful for the affectionate concern for the Pope’s safety,” but added that the complaint did not seem to reflect much flexibility in interpreting the meaning of the law. Full Story:Pope 'amused' by seat belt complaintSource:Catholic Herald