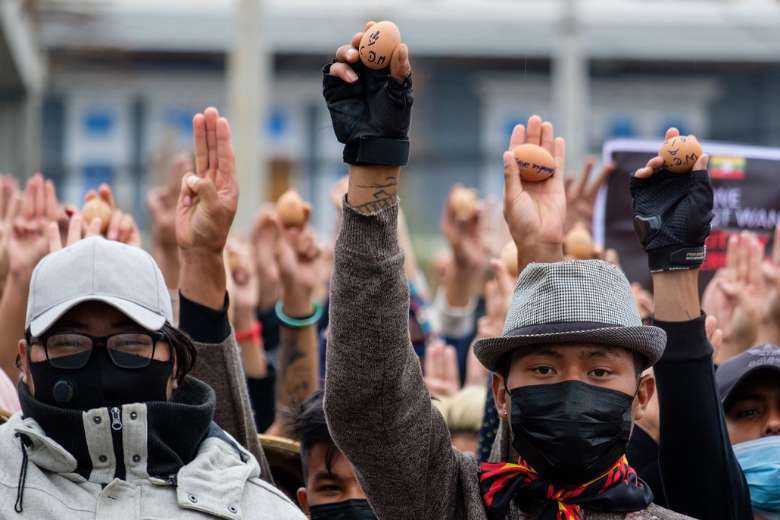 Protesters hold eggs during a demonstration against the military coup in Taunggyi in Myanmar's Shan state on April 4. (Photo: AFP)

As the Myanmar military’s merciless killings of peaceful protesters continue, Pope Francis has spoken out again by praising young people who have made sacrifices in the fight for democracy.

Delivering his Easter message at St. Peter’s Basilica on April 4, the pope praised youths in Myanmar who were “committed to supporting democracy and making their voices heard peacefully, in the knowledge that hatred can be dispelled only by love.”

The pope described as "scandalous" the fact that armed conflicts have not ended and military arsenals are being strengthened.

He called on the faithful to pray that the Lord grant peace and security so that the world can embrace its calling to be a place where all can see one another as brothers and sisters.

It was the fifth time the pope has spoken publicly about the crisis in Myanmar, which he regards with much affection after visiting the country in 2017.

“I, too, kneel on the streets of Myanmar and say, ‘Stop the violence,’” Pope Francis said on March 17. “I, too, spread wide my arms and say, ‘Make way for dialogue.’”

He was referring to Sister Ann Rose Nu Tawng, a nun from Myitkyina in Kachin state who has been lauded as an icon of peace after her brave acts in kneeling in front of security forces in February and March came to global attention.

Catholics represent just 1 percent of Myanmar's population of 54 million but nuns, priests and laypeople have taken part in pro-democracy protests and held prayers for a peaceful solution.

Young people have used a variety of creative ways to protest since the military overthrew the elected government headed by Aung San Suu Kyi on Feb. 1.

On April 4, anti-coup protesters in the Buddhist-majority nation launched an Easter egg campaign to show defiance to the military.

Protesters wrote messages on Easter eggs such as “Spring Revolution,” “We must win” and “Get out MAH” — a reference to military coup leader Min Aung Hlaing — which were posted on social media.

“Easter is all about the future and the people of Myanmar have a great future in a federal democracy,” said Dr. Sasa, international envoy for the ousted civilian government.

Dr Sasa, who uses only one name, is an ethnic Chin Christian from Chin state in western Myanmar, a Christian stronghold.

Last week the UN Security Council strongly condemned the death of hundreds of civilians and the use of violence against protesters.

However, the junta ignored repeated calls by world leaders and its violence crackdown against protesters and bystanders has continued.

At least 564 people including 47 children have been killed and at least 2,667 are currently detained, according to a rights group which tracks casualties and arrests.

Myanmar’s military has reinforced its offensive in ethnic-minority areas including Christian-majority Kachin state and Karen state, another largely Christian region.

Thousands of people fled their homes and took refuge in the jungle following the military’s airstrikes in Karen state in late March that left at least 10 dead and many injured.

Around 3,000 people who took refuge in Thailand were sent back to Myanmar last week despite Thai officials initially claiming they were preparing for an influx of refugees from the neighboring country.