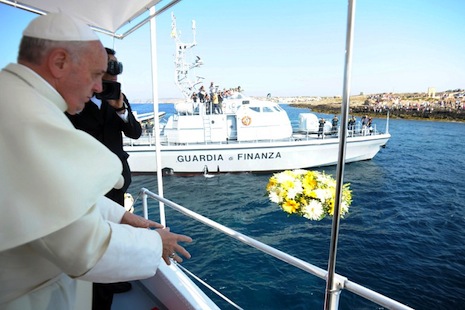 Pope Francis throws a wreath into the sea in honor of immigrants who have perished (Picture: Osservatore Romano/AFP)

Before saying a word publicly, Pope Francis made the sign of the cross and tossed a wreath of white and yellow flowers into the Mediterranean Sea in memory of the estimated 20,000 African immigrants who have died in the past 25 years trying to reach a new life in Europe.

Just a few hours before Pope Francis arrived on the Italian island of Lampedusa July 8, the Italian coast guard accompanied another boat carrying immigrants to the island's port.

The 165 immigrants, one of whom said they were originally from Mali, had spent two days at sea making the crossing from North Africa; the immigrants were accompanied to a government reception center, a locked facility where 112 people -- half under the age of 18 -- already were being housed. Most will be repatriated, although a few may receive refugee status.

In his homily at an outdoor Mass, Pope Francis said he decided to visit Lampedusa, a small island with a population of 6,000 and just 70 miles from Tunisia, after seeing newspaper headlines in June describing the drowning of immigrants at sea.

"Those boats, instead of being a means of hope, were a means of death," he said.

Wearing purple vestments, like those used during Lent, and using the prayers from the Mass for the Forgiveness of Sins, Pope Francis said the deaths of the immigrants are "like a thorn in the heart," which spurred him to offer public prayers for them, but also to try to awaken people's consciences.

"Who is responsible for the blood of these brothers and sisters of ours?" the pope asked in his homily. "All of us respond: 'It wasn't me. I have nothing to do with it. It was others, certainly not me.'"

"Today no one feels responsible for this," he said. "We have lost a sense of fraternal responsibility" and are acting like those in the Gospel who saw the man who had been beaten, robbed and left on the road half dead, but they kept walking.

"Maybe we think, 'Oh, poor soul,' but we continue on our way," the pope said.

"The culture of well-being, which leads us to think only of ourselves, makes us insensitive to the cries of others," Pope Francis said, adding that the globalization of the world's economy in many cases has led to "the globalization of indifference."

Full Story: Pope calls for repentance over treatment of migrants