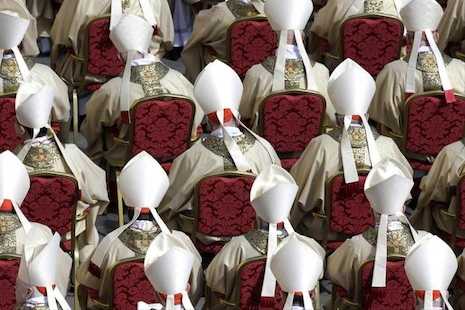 Francis has issued a papal chirograph officially announcing the establishment of his “G8”, the group of eight cardinals who will have the task of advising the Pope on the government of the universal Church and the revision of the Apostolic Constitution Pastor Bonus on the Roman Curia.

The document published on Monday and dated 28 September, mentions the discussions held during the pre-Conclave General Congregations.

“Among the suggestions that emerged during the course of the General Congregations of Cardinals prior to the Conclave, was the convenience in instituting a small group of Members of the Episcopate, from different parts of the world, that the Holy Father could consult with, either individually or collectively, on particular issues,” the chirograph reads.

In the chirograph, Francis states: “Now, after mature reflection, I consider it opportune, through this Chirograph, to officially institute as a ‘Council of Cardinals’, whose task is to help in the government of the universal Church and to study a draft revision of the Apostolic Constitution Pastor Bonus on the Roman Curia.”

The Pope confirmed that the council “will be composed of the same persons mentioned above and may be consulted, both individually and as a Council, on matters I feel worthy of attention.

Said Council, the number of components of which I reserve the right to configure as deemed adequate, will be a further expression of Episcopal communion and auxiliary service that the Bishops around the world can offer to munus petrinum.”

The details of the council’s structure have therefore not yet been defined. Since it is a new advisory institution (council), adjustments will be made along the way as needed.

The Pope confirmed what he said on a number of occasions and that is, that the more direct involvement of certain members of the Episcopate in advising the Bishop of Rome was something that had been requested during the pre-Conclave discussions. The council only has one Italian member, Cardinal Bertello, who is President of the Vatican City Governorate. The rest are cardinal archbishops of various dioceses across the five continents. Only one of these is Emeritus.

The council will not only be addressing the reform of the Roman Curia but will also be responsible for advising on the government of the universal Church. The “G8” will function as a group but members may also be consulted “individually” on matters he deems as important.

The chirograph makes no mention of relations with other institutions, which is further proof that it is still an open structure in the making, whose purpose is simply to advise and help the Pope.

“It will boost the instruments already in place,” said the director of the Holy See Press Office, Fr Federico Lombardi, in a press conference. “You will recall that advice is also given in various meetings such as the meeting of heads of Curia dicasteries and the commissions in charge of looking into the Church’s financial and administrative affairs, such as the Synod of Bishops. Then there are the bishops’ ad limina visits.”

“Over the past months, the group of eight cardinals has been gathering proposals and notes from individual advisors working in their respective fields of expertise or directly from the Pope, or from the Roman Curia and the Secretary of State. About 80 documents have been gathered and circulated among the council’s members and its secretary, Bishop Marcelo Semeraro, who has prepared an initial summary,” Fr Lombardi said.

The group’s various members, who are currently staying in St. Martha’s House, have already held several meetings with Pope Francis, so the work in fact began some time ago. In recent days there were some informal meetings, which the Pope did not attend.

“There was a meeting on Saturday and there will be another one this afternoon [Monday],” Fr Lombardi said. “Official meetings will take place in the private library near the entrance of the papal apartment in the Apostolic Palace. The Pope will attend the meetings that will be held in the morning and in the evening.”

Cardinal Óscar Andrés Rodríguez Madariaga is in charge of coordinating the meetings. The Pope will give a very brief introduction but will mostly be just listening. Each of the eight cardinals will give their input on the various proposals put forth.

“After this initial meeting, others will follow, so we cannot expect there to be any definitive conclusions, documents published or big decisions of any kind taken within the next few days.”