Pope Francis prepares to celebrate an open air Mass at Contecar — Cartagena's maritime terminal — during the last day of his visit to Colombia on Sept. 10. (Photo by AFP)

Pope Francis has issued a decree greatly enhancing the authority of local churches that will have special significance in Asia.

The decree, or motu proprio as it is called in church parlance, enables local churches across the world to take a more direct hand in developing and approving the texts used in the celebration of sacraments.

The control of liturgical texts and sacramental formulas has been a matter of considerable controversy to many throughout the church, including bishops' conferences in Asia such as in Japan.

For the last 20 years, the Vatican has directly challenged a specific directive of Vatican II that had the process of revision and approval of these texts to include local churches and with experts in vernacular language rather than Vatican officials.

This new decree will have a wide ranging impact across Asia. Dated Sept. 3 but only released on Sept. 9, the document as reported by the Catholic News Agency deals explicitly with two specific changes to Canon 838 of the Code of Canon Law, which address the authority of the Apostolic See and national episcopal conferences in preparing liturgical texts in vernacular languages.

The changes introduced were to paragraphs 2 and 3 of Canon 838.

Canon 838.2 has until now stated that: "It is for the Apostolic See to order the sacred liturgy of the universal Church, publish liturgical books and review their translations in vernacular languages, and exercise vigilance that liturgical regulations are observed faithfully everywhere."

However, with Pope Francis' motu proprio, the text has been changed to read: "It is for the Apostolic See to order the sacred liturgy of the universal Church, publish liturgical books, recognize adaptations approved by the Episcopal Conference according to the norm of law, and exercise vigilance that liturgical regulations are observed faithfully everywhere."

Similarly, Canon 838.3 previously read: "It pertains to the conferences of bishops to prepare and publish, after the prior review of the Holy See, translations of liturgical books in vernacular languages, adapted appropriately within the limits defined in the liturgical books themselves."

The text will now read: "It pertains to the episcopal conferences to faithfully prepare versions of the liturgical books in vernacular languages, suitably accommodated within defined limits, and to approve and publish the liturgical books for the regions for which they are responsible after the confirmation of the Apostolic See." Francis reopens a question many thought had been closed Redefining the boundaries of the church 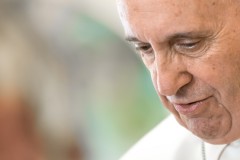 The changes apportion a greater share of responsibility for the preparation and approval of liturgical translations to episcopal conferences, rather than the Vatican's Congregation for Divine Worship and the Sacraments.

The motu proprio proposes that "general guidelines" for the use of the vernacular "must be followed by (local Church) liturgical commissions as the most suitable instruments so that, across the great variety of languages, the liturgical community can arrive at an expressive style suitable and appropriate to the individual parts, maintaining integrity and accurate faithfulness especially in translating some texts of major importance in each liturgical book."

Given the weight of the task, Pope Francis said it is no surprise that certain problems have arisen between episcopal conferences and the Apostolic See along the way.

Across the world, objections have been made to what the Vatican imposed as texts to be followed in the great variety of languages when local experts thought the text to be awkward, at times unintelligible and failing to communicate the Gospel message effectively.

In order for decisions about the use of the vernacular language to be of value in the future, "a vigilant and creative collaboration full of reciprocal trust" between the Apostolic See and bishops' conferences is "absolutely necessary."

Because of this, "in order that the renewal of the whole liturgical life might continue," Pope Francis said, "It seemed opportune that some principles handed on since the time of the Council should be more clearly reaffirmed and put into practice."

Apt attention ought to be paid to the "benefit and good of the faithful," while at the same time ensuring that the "right and duty" of episcopal conferences is not forgotten, since it is their task to "ensure and establish that, while the character of each language is safeguarded, the sense of the original text is fully and faithfully rendered and that even after adaptations the translated liturgical books always illuminate the unity of the Roman Rite."

In order to make collaboration between the Apostolic See and bishops conferences "easier and more fruitful," and after having listened to advice from a commission of bishops and experts he established to study the issue, the pope said he wished to make the "canonical discipline" already in force in canon 838 more clear.

Namely, Pope Francis said, he wanted the changes to be more directly in line with paragraphs 36, 40 and 63 of the Second Vatican Council Constitution on Sacred Liturgy "Sacrosanctum Concilium" and the provisions of point nine of Paul VI's 1964 motu proprio "Sacram Liturgiam."

This, so that "the competency of the Apostolic See surrounding the translation of liturgical books and the more radical adaptations established and approved by Episcopal Conferences be made clearer, among which can also be numbered eventual new texts to be inserted into these books."

All changes will go into effect on Oct. 1.