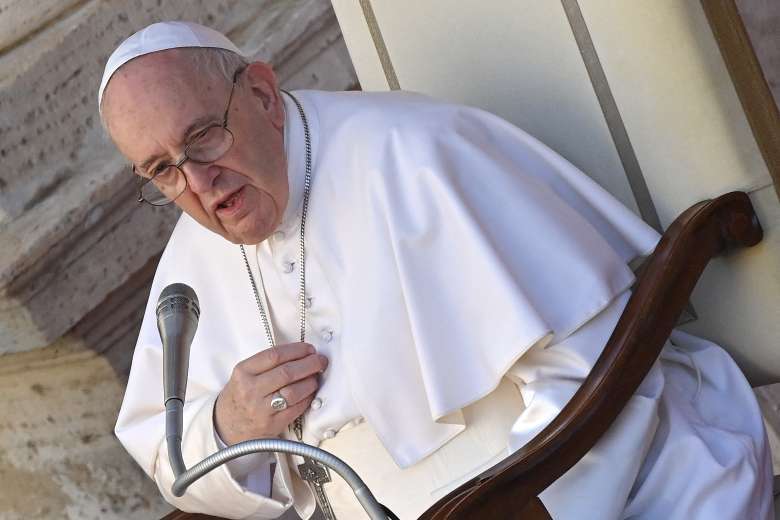 Pope Francis speaks during his weekly outdoors general audience on May 26 at the San Damaso courtyard in the Vatican. (Photo: Alberto Pizzoli/AFP)

Pope Francis has invited Lebanese Christian leaders to the Vatican for a day of prayer on July 1, expressing concern about the “the worrying situation in the country.”

The pope, who had expressed his desire to visit the only Arab nation with a Christian head of state, said on May 30 that he will discuss with them the country's worst crisis since the end of the civil war in 1990.

After the Sunday Angelus with pilgrims in St. Peter’s Square, the pontiff said July 1 would be a "day of reflection on the worrying situation in the country.”

The Christian communities in Lebanon will “pray together for the gift of peace and stability,” the pope said.

The West Asian country has the largest percentage of Christians in the Middle East. Christians make up more than third of its 6.8 million people.

Due to the political deadlock, the country has been without a government since the cabinet resigned days after the massive blast last Aug. 4.

I entrust this intention to the intercession of the Mother God, so venerated at the Shrine of Harissa

Lebanon has yet to recover from a huge chemical explosion at the Beirut port that killed 200 people, injured 600 others and further weakened its economy, which was already facing a meltdown.

“I entrust this intention to the intercession of the Mother God, so venerated at the Shrine of Harissa, and from this moment, I ask you to accompany the preparation of this event with solidarity in prayer, invoking a more peaceful future for this beloved country,” the pope said.

Lebanon is facing a serious crisis as unemployment has soared to record levels and the national currency has lost at least 80 percent of its value against the US dollar since 2019.

Prime minister-designate Saad al-Hariri has been in disagreement with President Michel Aoun, a Christian, over cabinet positions for months. Pope Francis met with Hariri on April 22 at the Vatican. Hariri was given the responsibility to form a new government last October.

After the meeting, Hariri said Pope Francis would only visit the country after a government is formed.

Hariri, a three-time prime minister, had quit on Oct. 29, 2019, in the wake of mass protests. He was nominated as prime minister again in October but has been unable to cobble together a new government.

“A weakening of the Christian presence risks destroying internal equilibrium and the very reality of Lebanon. Moreover, without an urgently needed process of economic recovery and reconstruction, the country risks bankruptcy, with the possible effect of a dangerous drift towards fundamentalism,” Pope Francis said.

The Holy See’s press office did not clarify which of Lebanon’s three main Christian denominations -- Maronite Catholics, Eastern Orthodox and Melchite Catholics -- would attend the July 1 meeting at the Vatican.

Cardinal Bechara Boutros Rai, head of Lebanon’s Maronite Catholics, has repeatedly urged political leaders to “overcome the logic of partisan interests” and form a government to rescue the country.

The cardinal said that there was a “great chasm” between the people in political power, with their “personal interests and calculations,” and those who suffer “poverty, deprivation, and hunger.”

Pope Francis had called for a renewed commitment to bring stability in Lebanon during this year’s speech to diplomats accredited to the Vatican.

Earlier this week, the Commission of the Bishops' Conferences of the European Community (COMECE) had urged the European Union to support Lebanon, which is facing a political and economic crisis.

The July 1 meeting in the Vatican will be used by the pope as an opportunity to express his solidarity, given that a pontifical visit to the strife-torn country may not materialize in the near future.