In Japan, the number of electric vehicles on the road is expected to rise to 55 percent by 2030 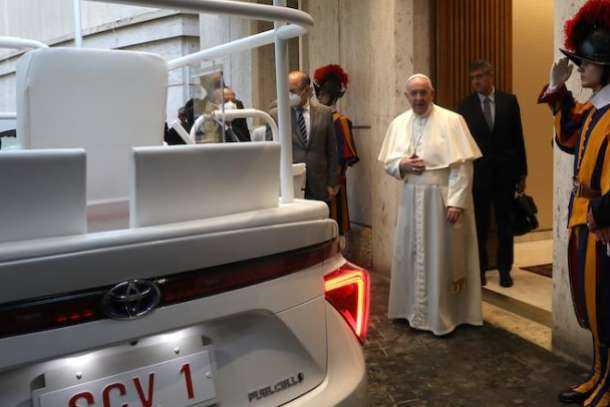 Pope Francis receiving a gift from the Catholic Bishops’ Conference of Japan (CBCJ), a hydrogen-powered Toyota Mirai, adapted for his needs in October 2019. (Photo:https://blog.toyota.co.uk)

The world is gradually embracing green energy for hybrid electric vehicles, with the active support of Pope Francis and inspired by his path-breaking encyclical Laudato si’.

Japan, a leader in the electric car market, is mulling a ban on sales of new gasoline-engine cars by the mid-2030s, public broadcaster NHK announced on Dec. 3.

A significant decision for one of the world’s largest carmaking economies, aligning the East Asian island nation with other governments distancing themselves from fossil fuel vehicles.

It may be coincidental that the Japanese announcement comes just months after the Catholic Bishops' Conference of Japan (CBCJ) donated a hydrogen-powered Toyota Mirai to the Vatican for Pope Francis' use.

The car, donated in October, is one of the two green vehicles that Toyota specially made for Pope Francis' needs during his visit to Japan in November 2019.

The Mirai, meaning future in Japanese, is the first mass-produced hydrogen-powered car launched in 2014. The car emits no carbon dioxide but only water.

Pope Francis, a strong advocate for environmental protection, was in the Vatican to personally accept the Japanese bishops' donation.

On June 18, the fifth anniversary of Pope Francis' encyclical Laudato si’, the Vatican released guidelines, signed by all of the Vatican's dicasteries, to combat climate change, which called for Catholics to unload their fossil fuel investments and put their money behind renewable energy resources.

The pope called on Catholics to avoid "support for companies harmful to human or social ecology," such as weapon makers and abortion providers, as well as the fossil fuel industry.

The pope also sought a tax to be imposed on carbon dioxide emissions.

Following the Vatican's call to divest, more than 40 faith organizations from 14 countries withdrew their funds from fossil fuel companies, which was touted as the "largest-ever" withdrawal by religious organizations.

The Presbyterian Church in the U.S. and various Christian denominations in the United Kingdom also followed suit and divested from fossil fuel stocks in April this year.

The Global Catholic Climate Movement, a lay Catholic group, said that other faith organizations owned by protestant and Jewish institutions also have severed ties with the fossil fuel industry.

Pope Francis has personally initiated many sustainable efforts. The pontiff, in November this year, convened an "Economy of Francesco" conference to chalk out innovative ways to develop a sustainable economy, propelled by leadership from young people.

Over 2000 "change-makers" took part in the three-day virtual event in Assisi in Italy. The so-called "change-makers," who came together at the invitation of Pope Francis, are young professionals and business people championing ethical business models.

As they say, there is no such thing as a free lunch. No one could be faulted for seeing a marketing strategy in Toyota presenting a Mirai to the pope. It made international headlines, particularly in business publications.

Home to some of the world's leading car-makers, Japan plans to cut carbon emissions to zero on a net basis by 2050. This will make Japan the second G7 country to put a deadline on phasing out gasoline vehicles.

Carmakers have invested heavily in electric cars and hybrid gasoline-electric vehicles to meet the growing demand, particularly in the world's two biggest auto markets, China and the U.S.

In Japan, the number of electric vehicles on the road is expected to rise to 55 percent by 2030, Boston Consulting Group, a leading strategy consulting firm, said in a report on prospects for battery-powered cars.

The switch to electric cars will accelerate as battery prices fall more rapidly than previously expected, Boston Consulting predicted in the report.

Other Asia nations like China and South Korea have embraced green energy to end net carbon emissions as part of efforts to keep global warming in check.

Besides Britain, the US and Canadian states, Norway and Germany, may impose curbs on fossil fuel cars. The European Union will make a decision as early as this month, media reports said.

The energy transition is a huge task for the world, which comes with both challenges and opportunities.

For car manufacturers and their suppliers, this new market is already profitable enough to woo institutional investors.  However, as happened with the fossil fuel industry, it will result in the commodification of green energy followed by the "energy obesity" symptom.