Pope has used diplomats to create culture of encounter, says US author

Vatican diplomacy has diverged sharply from US foreign policy under Pope Francis, according a new book Vatican diplomacy has diverged sharply from US foreign policy under Pope Francis, according to a new book, which details examples to illustrate the widening divide.

"While Francis has continued the pragmatism of his two predecessors, he's also a skilled administrator, who's mobilized the whole diplomatic corps with its interlocking assets to implement a culture of encounter," said author Victor Gaetan. "The Holy Father's accomplishments deserve to be appreciated, especially when so much random, unjust criticism is deployed against him."

It maintains the pope's diplomacy has worked better than the "militarized approach" of recent US policy and demonstrates advances achieved by the Vatican as a mediator and reconciler, even with countries once considered hostile.

Gaetan has served as an international correspondent for Catholic News Service and the National Catholic Register, writing from Europe, Asia, the Middle East and Latin America, and has also contributed to Foreign Affairs and the Catholic magazine America. Among other degrees, he has a master of arts in law and diplomacy at The Fletcher School, Tufts University, Medford, Massachusetts.

In a July 28 interview with CNS, Gaetan said he had personally benefited from Vatican diplomacy as a child in Romania, when negotiations with the communist regime led to the reopening of churches.

He added that veteran US officials viewed Rome's "Ostpolitik" toward Eastern Europe as "the jewel of Vatican diplomacy" and said many foreign policy shapers had praised the "professionalism and deep knowledge" of Vatican diplomats.

"I hope this book will encourage greater appreciation of the excellence and relevance of Vatican diplomatic practice," Gaetan told CNS.

As examples of divergent Vatican-US approaches, growing since St. John Paul II's "deep opposition" to the 2003 invasion of Iraq, the book cites the Vatican's refusal to demonize Russia, cultivating it instead as a "valued Christian ally," and encouragement of Christian leaders in Syria who rallied around President Bashar Assad.

Like previous pontiffs, Pope Francis has maintained strong ties with Shia leaders in Iran, Iraq and Lebanon, the book says, while his engagement with Sunni leaders in Egypt, Saudi Arabia and elsewhere led to a historic February 2019 peace declaration with Sheikh Ahmad el-Tayeb, grand imam of al-Azhar University. 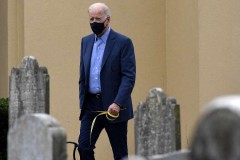 In South Sudan, the pope backed a unity government and opposed Washington's "pointless sanctions." He also supported an Israeli-Palestinian "two-state solution," signing the Vatican's first bilateral accord with Palestine and opposing President Donald Trump's controversial peace plan and the US embassy's move to Jerusalem.

In Colombia, Pope Francis sought to end "five decades of devastating killings, destruction and narco-trafficking" by bringing opposing leaders together, the book points out.

Pope Francis defied harsh US criticisms with a renewed 2020 Vatican agreement with China, recognizing a joint process for selecting bishops while giving the pope the final say.

He added that Pope Francis, who has visited 52 countries since his March 2013 election, wielded power as a "moral authority," but also exercised "broad and deep control" over the Vatican's diplomatic apparatus.

"The Holy See under Pope Francis no longer has a Western European outlook," Gaetan said.

"He's deeply frustrated with Western powers, especially the U.S., as arms merchants fomenting conflict, and he sees little difference between the imperial pretensions of the US, Russia or China," he added.

Gaetan said he believed much "relentless criticism" of Pope Francis in the US reflected "misguided deep-state attempts to undercut a rival power," and "mutual skepticism between empires with deeply divergent worldviews."

Although "smaller than the Pentagon and its parking lot," the Vatican can draw on a school of diplomacy founded by Pope Clement VI in 1701, Gaetan said, noting that diplomacy emphasizes impartiality, dialogue and "showing faith through charity."

The Holy See has full diplomatic ties with 181 states and a permanent presence in around 40 international organizations, from the United Nations and its agencies to the Council of Europe and Arab League.

In his interview, Gaetan said popes had shown "power of prediction" by opposing the 1919 Treaty of Versailles, which "punished Germany too harshly" after World War I, and by resisting US pressure to approve the Korean War in the 1950s and curb dialogue with Soviet ruler Nikita Khrushchev in the 1960s.