St. Joseph is an example of strength and tenderness for today's fathers, says Francis 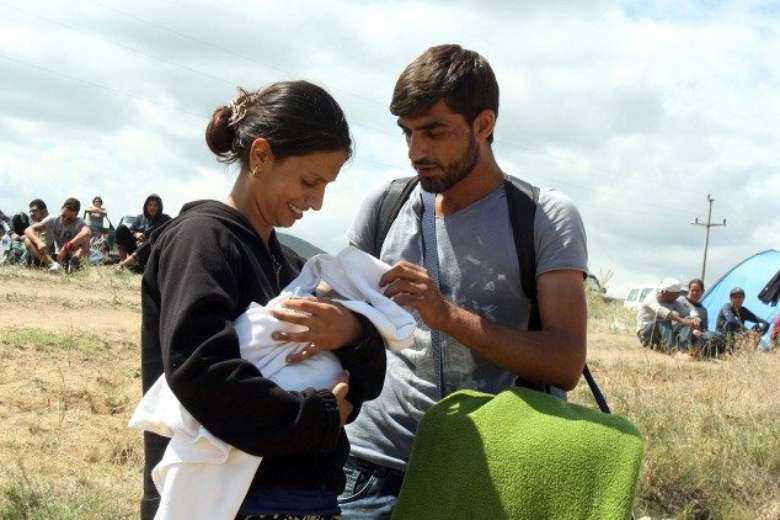 A migrant couple from Syria with their baby in a temporary facility for refugees on the border between Serbia and Macedonia. (Photo: vaticannews)

With so many problems and challenges in the world, especially worsened by the pandemic, people can find strength and guidance in St. Joseph, Pope Francis said.

"Precisely in this time that is so difficult, we needed someone who could encourage us, help us, inspire us, in order to understand which is the right way to know how to face these dark moments," he said in a new interview.

"Joseph is a bright witness in dark times. This is why it was right to make room for him at this time, in order to find our way again," he said in an interview with the Vatican's media outlets published Jan. 13.

He said he was praying for all families that are suffering, and he understands how difficult it is to face "not being able to feed one's children, feeling the responsibility for the life of others."

So many families are forced to flee war, but are rejected at borders where "no one takes seriously or willingly ignores" their great need, he added. "I would like to say to these fathers, to these mothers, that for me they are heroes because I see in them the courage of those who risk their lives for love of their children, for love of their family."

"May these fathers turn with trust to St. Joseph, knowing that as a father, he too had the same experience, the same injustice. And I would like to say to all of them and to their families, do not feel alone! The pope remembers them always and as far as it is possible, will continue to give them a voice and will not forget them," he said.

I have always nurtured a special devotion for St. Joseph because I believe that his person represents what Christian faith should be for each of us, in a beautiful and simple way

The interview, conducted in Italian and translated into five other languages, focused on the theme of "paternity" and how St. Joseph -- with his strength, determination and tenderness -- is an important example for fathers, the church and families.

The pope led a special year dedicated to St. Joseph from Jan. 1, 2020, to Dec. 8, 2021, and he is currently giving a series of talks on the saint at his weekly general audiences. His papal ministry officially began on March 19, the feast of St. Joseph, and his papal coat of arms includes symbols representing Joseph as well as Mary and Jesus.

"I have always nurtured a special devotion for St. Joseph because I believe that his person represents what Christian faith should be for each of us, in a beautiful and simple way," he said. "In fact, Joseph is a normal man, and his holiness consists precisely in making himself a saint through the beautiful and ugly things he had to experience and face."

Mary gave birth to the Word-made-flesh and Joseph is the one "who defended him, who protected him, who nourished him, who made him grow," the pope said.

The Holy family experienced difficult events, but St. Joseph accepted his responsibilities and knew how to listen to God speaking to his heart, he said.

The lesson there, he said, is "only someone who prays, who has an intense spiritual life, can have the capacity to know how to distinguish God's voice in the midst of many other voices that dwell in us."

Another lesson, he said, is "Joseph is a concrete man, that is, a man who faces problems with great practicality, who never assumes the position of being a victim when faced with difficulties and obstacles. Instead, he always places himself in the perspective of reacting, of responding, of trusting God and finding a solution in a creative way."

At a time when many young people "are often afraid to decide, to choose, to take a risk" in life, the church can help by modeling the parenthood of Joseph: not simply saying "yes or no" to certain choices, but by encouraging the young not to be afraid to make a choice.

Every choice carries consequences and some risks, he said, and "a true father does not tell you that everything will always go well, but rather that even if you may find yourself in a situation in which things are not going well, you will be able to face and live with dignity even those moments, those failures."

Fatherhood is facing a crisis in wider society today, and the pope said "we should have the courage to say that the church should not only be maternal but also paternal. She is called to exercise a paternal, not a paternalistic ministry."

The church is correctly thought of as a mother and she carries out that motherhood by being merciful with a "love that generates and regenerates life," he said. Forgiveness and reconciliation, in fact, are how people get back on their feet again.

However, the church should rediscover its paternal aspect, the pope said, which is the ability to offer the right conditions for people to carry out their responsibilities, "to exercise their freedom, to make choices."

"If, on the one hand, mercy heals us, cures us, comforts us, encourages us," he said, "on the other, God's love is not limited simply to forgiving and healing, but rather, God's love spurs us to make decisions, to go out to sea."